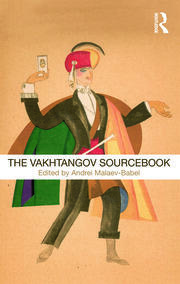 ‘Scrupulously compiled and skillfully translated by Andrei Malaev-Babel, The Vakhtangov Sourcebook ... provides the most comprehensive addition to English readers’ knowledge of the philosophy, pedagogy, and legacy of Vakhtangov.’ – Modern Language Review

'An exceptionally valuable book that promises to be the definitive reference for Vakhtangov's work for years to come.' – Theatre Topics

Yevgeny Vakhtangov was the creator of Fantastic Realism, credited with reconciling Meyerhold’s bold experiments with Stanislavski’s naturalist technique. The Vakhtangov Sourcebook compiles new translations of his key writings on the art of theatre, making it the primary source of first hand material on this master of theatre in the English speaking world.

Vakhtangov’s essays and articles are accompanied by:

Andrei Malaev-Babel is Assistant Professor of Theatre at Florida State University/Asolo Conservatory for Acting Training. He holds an M.F.A. from the Vakhtangov Theater Institute in Moscow, where he trained under Alexandra Remizova. He is a member of the international faculty for the Michael Chekhov Association (MICHA).

'The Vakhtangov Sourcebook, the first collection of Vakhtangov's writing to appear in English in nearly thirty years, is an extremely welcome correction to this state of affairs. In it, Andre Malaev-Babel gathers an excellent selection of Vakhtangov's journal entries, essays, director's notebooks, and letters, as well as lecture and rehearsal notes taken by his actors. Many of these writings appear in English for the first time ... an exceptionly valuable book that promises to be the defintitve reference for Vakhtagov’s work for years to come.’ – Robert Crane, Theatre Topics

'... The Vakhtangov Sourcebook gives a practical, thoughtful perspective on the actor-director relationship that will appeal to practitioners, students and scholars alike. Vakhtangov's sensitivity in working with actors and his openness to many styles remains very relevant today; The Vakhtangov Sourcebook reminds us that when we "enter the theatre", we, too, must "proceed with an open soul".' – Dassia N. Posner, Theatre Research International

‘The Vakhtangov Sourcebook is a valuable resource for acting and directing trainees as well as professional theatre makers… I highly recommend this book to those with a keen interest in Russian theatre or directing.’ – Studies in Theatre and Performance, Konstantinos Thomaidis