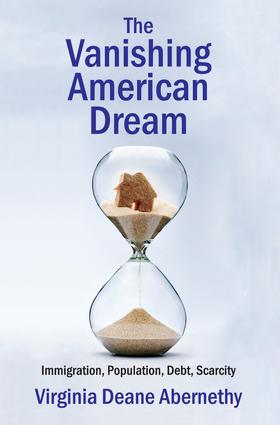 The United States has gone off track, allowing domestic and foreign aid policies to be co-opted by a government—abetted by mass media—that serves special interests rather than the greater national good. Americans' tendencies to trust, play fair, and help have been abused and require replacement by a realistic outlook.

The Vanishing American Dream posits solutions to get America back on the right track. Abernethy sees population growth driven by mass immigration as a major cause of economic and cultural changes that have been detrimental to most Americans. The environment has been degraded by over-crowding and increasing demands on natural resources. Work is cheapened by explosive growth in the labour force creating a buyer's market. One salary or wage no longer supports a family and educates children. Women working outside the home is a necessity, not a choice, for most American families. Furthermore, feminism, aimed originally at balanced gender roles, has been turned viciously against males of all ages and ultimately against females through degrading their traditional and valuable contributions.

Abernethy proposes that Americans need time to regroup, untroubled by a continuing influx of foreign peoples. The family, small business, and responsive local government are centres around which a solvent and confident citizenry can prosper again.

2 Carrying Capacity and Complexity
Introduction
The Politics of Conservation
Doing Government to the People
Carrying Capacity: The Traditions and Policy Implications of Limits
A State Shows the Way
Population Problems

5 The Unintended Consequences of Redistributed Wealth
Introduction
Optimism and Overpopulation
The Demographic Transition Revisited: Lessons for Foreign Aid and US Immigration Policy
Immigration Reduction Offers Chance for Softer Landing
The "One-World" Thesis as an Obstacle to Environmental Preservation

6 Population Growth Threatens Women and Children
Introduction
Coverage of the 1994 International Conference on Population and Development
The World's Women: Fighting a Battle, Losing the War
Cultural Perspectives on the Impact of Women's Changing Roles on Psychiatry