The Visual Effects Producer
Understanding the Art and Business of VFX 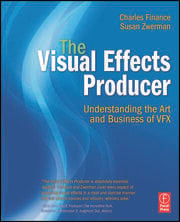 The Visual Effects Producer: Understanding the Art and Business of VFX

With decades of combined VFX production and supervisory experience in Hollywood, the authors share their experience with you, illuminating standard industry practices and tips on:

Also included are interviews with established, successful Hollywood VFX Producers about their career paths and how they got to where they are now.

From pre-production to final delivery, this is your complete guide to visual effects production, providing insight on VFX budgeting and scheduling (with actual forms for your own use) and common production techniques such as motion control, miniatures, and pre-visualization. Also included is a companion website (www.focalpress.com/cw/finance-9780240812632) with forms and documents for you to incorporate into your own VFX production workflows.

Charles Finance is a freelance VFX Producer and Supervisor and a member of the Visual Effects Society (VES), where he serves as co-chair of the Society's Awards Committee. After a stint in the U.S. Army as still photographer/cinematographer and earning his MA degree in Cinema from USC, he embarked on a career of producing and directing more than 70 non-theatrical films, most of them on scientific and technical subjects. His baptism in visual effects came in 1983, when producer Raffaella De Laurentiis asked him to take on the role of VFX Coordinator on David Lynch's Dune.

Upon completing Dune (which, with more than 500 optical effects, was one of the most visual effects-intensive films up to that time), he became VFX Production Manager at Van der Veer Photo Effects, where he helped guide effects production on Conan the Destroyer, Spacecamp and other features. In 1986 he co-founded Perpetual Motion Pictures, a full-service visual effects company that provided miniatures, matte paintings, blue screen photography, effects animation, and optical effects services to the feature film industry. At PMP - as the company became known - he contributed his talents as general manager as well as serving as its Visual Effects Producer. Since 1994, Mr. Finance has worked as a freelance VFX Producer, VFX Consultant, and occasional Supervisor. His credits include George of the Jungle, The Arrival, Bill and Ted's Excellent Adventure, and Dune. He served as on-set VFX Producer on Dungeons and Dragons and more recently as consultant on the TV series 24.
Ms. Zwerman is a highly respected Visual Effects Producer with an outstanding record of accomplishments in film production and visual effects. She began her career in film in New York, where she quickly rose through the ranks from Production Assistant to Assistant Director and Unit Production Manager in both films and commercials. She won a Grammy Award for "Best Concept Music Video for producing the music video I'm Fat, starring Weird Al Yankovic. After moving to Hollywood she worked for several years as UPM and Post-Production Manager before making the leap to VFX Producer on the film Tall Tale. Since then, her credit has appeared on a successsion of high-profile feature motion pictures such as The Guardian, Men of Honor, Alien Resurrection, and Broken Arrow. She is a member of the Directors Guild of America, the Producers Guild of America, and the Visual Effects Society. She is very active in these organizations: Chairperson of the Directors Guild of America's AD/UPM VFX/Digital Technology Committee (DGA); a board member of the Producers Guild of America's New Media Council (PGA); and Chair of the Visual Effects Society's Special Projects(VES). Over the past ten years she has planned and hosted numerous technology and visual effects seminars for these organizations and was honored with a Directors Guild of America Honor Plaque for extraordinary service to the guild's Technology Council. She continues to share her knowledge by leading VFX seminars at universities and film schools, teaching visual effects techniques to young professionals just entering the entertainment industry

"The Visual Effects Producer is absolutely essential reading!  Finance and Zwerman cover every aspect of producing visual effects in a clear and concise manner that will inform novices and industry veterans alike."

"This indispensable resource for VFX producers (and would-be VFX producers) is not only user friendly but jam packed with the information and techniques you'd otherwise have to learn the hard, painful and expensive way!"

"A must read for all filmmakers and aspiring filmmakers. The authors have combined wisdom and practicality to produce an extraordinary book that explains the business of producing VFX without losing sight of the art and magic."