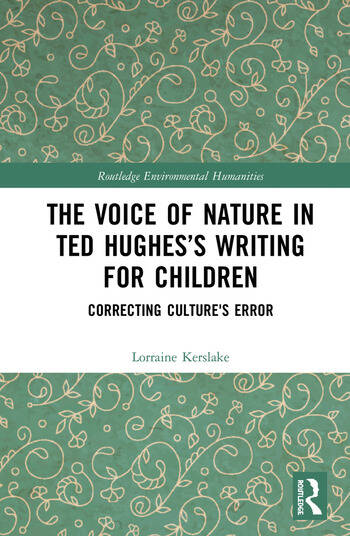 The Voice of Nature in Ted Hughes’s Writing for Children: Correcting Culture's Error

Despite the fame Ted Hughes’s poetry has achieved, there has been surprisingly little critical writing on his children’s literature.

This book identifies the importance of Hughes’s children’s writing from an ecocritical perspective and argues that the healing function that Hughes ascribes to nature in his children’s literature is closely linked to the development of his own sense of environmental responsibility. This book will be the first sustained examination of Hughes’s greening in relation to his writing for children, providing a detailed reading of Hughes’s children’s literature through his poetry, prose and drama as well as his critical essays and letters. In addition, it also explores how Hughes’s children’s writing is a window to the poet’s own emotional struggles, as well as his environmental consciousness and concern to reconnect a society that has become alienated from nature.

This book will be of great interest to not only those studying Ted Hughes, but also students and scholars of environment and literature, ecocriticism, children’s literature and twentieth-century literature.

Lorraine Kerslake holds a PhD in children’s literature and ecocriticism, and has published widely in the field. She also has a BA in English and French studies and an MA in Translation and Interpreting from the University of Alicante, Spain, where she currently works teaching English Language and Literature.

"In this book Lorraine Kerslake takes Ted Hughes at his word in two respects that have hitherto been largely overlooked by Hughes scholars. First is his remarkable suggestion that in each new child lies the potential for nature to ‘correct culture’s error’. Never has the exploration of this idea been more urgently needed. Second is Hughes´s conception of art as the healing of wounds in the lives of both the artist and his audience. Following these two lines of enquiry together Lorraine Kerslake makes profound and ultimately redemptive discoveries in her ecocritical readings of Hughes’s important writings for children that are also ‘within hearing’ of adult readers." — Professor Terry Gifford, Editor, Ted Hughes in Context (2018), Chair, The Ted Hughes Society

"By entwining Ted Hughes’s writing for children with his environmental activism, Lorraine Kerslake brings together elements of his work typically kept apart. From Rachel Carson to Lawrence Buell she reads current ecocritical theory in the context of the characters who figure in Ted Hughes’s poetry and prose for children. Nessie, the Iron Man, the Iron Woman, Ffangs and many other outsized magical creatures who populate Hughes’s works are characterized as heroic leaders imaginatively conscripting armies of child readers into "correcting culture’s error." As the dangers of global environmental disasters grow ever closer, Kerslake’s book maps Hughes’s programme for redemption, healing, and possibly, grace.

"Lorraine Kerslake's Correcting Culture's Error provides a timely and much needed addition to Hughes scholarship that will be welcomed by both general and specialist readers. Although scholars have long recognised the central importance of Hughes's writing for children, this is the first book-length study to explore the significance of this writing in a comprehensive way. Kerslake offers a full discussion of all Hughes's work for children - drama, poetry, prose and radio programs. She offers fresh insights into every aspect of his oeuvre, delineating the profound significance of children for Hughes own development. She positions Hughes's lifelong engagement with child readers within the context of his deepening ecological awareness and commitment to repairing the major fault-lines in our culture. This is likely to become a standard reference point for everyone engaged with these issues." — David Whitley, Cambridge University, UK