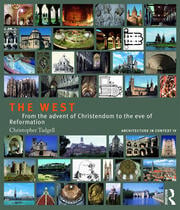 The West: From the advent of Christendom to the eve of Reformation

This volume tells the story of European architecture in the ‘middle ages’ – from the destruction by northern barbarians of Rome and the urban society it had fostered to the rediscovery of Classical values and the rebirth of humanism in 15th-century Italy.

This period saw the evolution of feudalism, with its patterns of dependency and obligation, the establishment of monasticism in its varied forms, and the rise of the Holy Roman Empire. The art and architecture that emerged alongside this profound social reordering is known as Romanesque. Based on the legacy of ancient Rome, it included elements from Carolingian, Ottonian, Byzantine and northern European traditions. This synthesis produced some of its most powerful monuments in the glorious abbey churches that a period of prosperity and political stability fostered in unprecedented numbers.

Romanesque architecture was succeeded by the Gothic, a movement that originated at the abbey of S. Denis in France in the 12th century. Structurally daring, it heralded a new architecture of light, most enduringly expressed in great cathedrals, subsequently in the growing sophistication of houses and civic architecture as feudal magnates increasingly ceded power to the central authority.

The book ends with the Italian rediscovery of Classical ideas and ideals and the emergence of the great Renaissance theorists and architects, including Brunelleschi, Alberti and Bramante. As well as the palazzos, villas and churches of Renaissance Italy, this period saw the building of great châteaux in France, palaces in Germany and the golden-domed cathedrals of Russia.

With more than two thousand images, including many plans, The West is an unprecedented single-volume survey of the period, covering the whole of Europe from Ireland to Russia, and placing architectural developments within their political, technological, artistic and intellectual contexts.