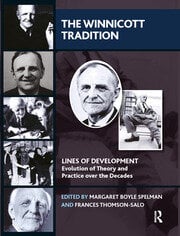 The Winnicott Tradition: Lines of Development-Evolution of Theory and Practice over the Decades

This book includes articles that describe how Winnicott's thinking facilitates the building of bridges between the internal and external realities, and, outside the boundaries of psychoanalysis as well as within it, between different schools of thought.

Series Editors’ Foreword -- Introduction -- Winnicott: His Work and Legacy -- Section Introduction -- Has Winnicott become a Winnicottian? -- Winnicott’s constant search for the life that feels real -- “People who think in pictures”: the continuing dialogue between Marion Milner and Donald Winnicott in Bothered by Alligators -- Unassimilated aggression and the emergence of the unit self: Winnicott, Jung, and Matte Blanco -- Winnicott and Bion: claiming alternate legacies -- Winnicott’s anni horribiles: the biographical roots of “Hate in the counter-transference” -- Between Winnicott and Lacan -- A measure of agreement: an exploration of the relationship of Winnicott and Phyllis Greenacre -- Clinical Work and Applications of Winnicott’s Tradition -- Section Introduction -- On potential space -- Creating connections -- The paternal function in Winnicott: the psychoanalytical frame, becoming human -- “Where we start from”: thinking with Winnicott and Lacan about the care of homeless adults -- Seeing and being seen: the psychodynamics of pornography through the lens of Winnicott’s thought -- The isolate and the stranger: Winnicott’s model of subjectivity and its implications for theory and technique -- Hatred and helping: working with our own fear and narcissistic rage -- “I feel that you are introducing a big problem. I never became human. I have missed it” -- The analyst’s oscillating between interpreting and not interpreting: a peculiar Winnicottian point of view on interpreting and not interpreting -- Maternal perinatal mental illness: the baby’s unexperienced breakdown -- Mind the gap: dysynchrony in the writings of Winnicott and associated clinical thoughts -- Specialised Work in the Winnicott Tradition -- Section Introduction -- The importance of being seen: Winnicott, dance movement psychotherapy, and the embodied experience -- The location of authenticity -- Transitional/transitive—pictures from an exhibition -- The seriousness of playfulness -- Maternal form in artistic creation -- Ways of being: transitional objects and the work of art -- Unintegrated states and the process of integration: a new formulation -- The reflected self -- “Oedipus, schmedipus: so long as he loves his mother”: teaching Winnicott to a non-analytic audience -- Personal and Theoretical Reflections from Clinicians -- Section Introduction -- Two pioneers in the history of infant mental health: Winnicott and Bowlby -- Winnicott’s influence on paediatrics then and now -- Anna Freud and Winnicott: developmental stages, aggression, and infantile sexuality -- A personal reflection: claiming alternate legacies