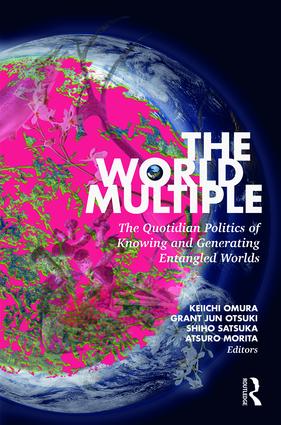 The World Multiple, as a collection, is an ambitious ethnographic experiment in understanding how the world is experienced and generated in multiple ways through people’s everyday practices. Against the dominant assumption that the world is a single universal reality that can only be known by modern expert science, this book argues that worlds are worlded—they are socially and materially crafted in multiple forms in everyday practices involving humans, landscapes, animals, plants, fungi, rocks, and other beings. These practices do not converge to a singular knowledge of the world, but generate a world multiple—a world that is more than one integrated whole, yet less than many fragmented parts.

The book brings together authors from Europe, Japan, and North America, in conversation with ethnographic material from Africa, the Americas, and Asia, in order to explore the possibilities of the world multiple to reveal new ways to intervene in the legacies of colonialism, imperialism, and capitalism that inflict damage on humans and nonhumans. The contributors show how the world is formed through interactions among techno-scientific, vernacular, local, and indigenous practices, and examine the new forms of politics that emerge out of them.

Engaged with recent anthropological discussions of ontologies, the Anthropocene, and multi-species ethnography, the book addresses the multidimensional realities of people’s lives and the quotidian politics they entail.

"This is no less than a trans-world colloquium, sustained in a brilliantly focused way on a subject of huge contemporary interest. A remarkable span of anthropologists speaking to one another, their inspiration lies at once in the provocation of Annemarie Mol’s pioneering analysis of ontological multiplicity, exemplified in the medical body, and in a burgeoning field that sees its scope as multi-species studies at a moment of enhanced ecological sensitivity. The outcome is nothing less than a new dynamism in descriptive practice. Re-describing the politics wedded to a ‘one world’ view of life, a contemporary critical urgency, means re-describing the world. In times of crisis we constantly tell ourselves we must think again—one of the most powerful messages of these ethnographic illuminations is that this applies as much to familiar terrain for the anthropologist as to the unfamiliar. They invite us to think again about where and when and who we think we are."

"If the world is more than one, the question rises how it hangs together. The contributions to this book tackle that very question. They present astutely analysed cases of encountering, juxtaposing, intertwining, coordinating, interfering, co-existing, translating, and further kinds of going-on between different (but what is different?) versions of a wondrous world—that is less than many."

–Annemarie Mol, Professor of Anthropology of the Body, University of Amsterdam, the Netherlands

"This book can be read as an argument to the effect that 'world' should be taken as an uncountable noun. It therefore displaces the traditional debate about how many worlds there are, asking instead how much world is there in the many, otherwise uncountable multiepistemic, transpecific, extracategorial, variontological assemblages that do the real. One of the disquieting answers to be found in The World Multiple is that the dominant modern way of doing the real is making less and less world worth living. And yet, we cannot but remain attentive to the flourishing 'arts of living' on this damaged planet; nay, get ready to practice them ourselves."

"Ontological multiplicity encounters postcoloniality: this book is essential reading for all scholars interested in struggles over nature, culture, and knowledge in the asymmetrical worlds in which the profoundly different realities of modernity and indigeneity are entangled together."

–John Law, Co-Director of ESRC Centre for Research on Socio-Cultural Change (CRESC) and Director of the Social Life of Method Theme within CRESC, UK

2. Earth-beings: Andean religion, but not only

4. Doing and undoing caribou/atîku: Diffractive and divergent multiplicities and their cosmopolitical orientations

7. Landscapes, by comparison: Practices of enacting salmon in Hokkaido, Japan

9. Temporalities in translation: The making and unmaking of "folk" Ayurveda and bio-cultural diversity

10. Healing in the Anthropocene

11. Out of nothing: (Re)worlding "theory" through Chinese medical entrepreneurship

12. Traveling and indwelling knowledge: Learning and technological exchange among Vezo fishermen in Madagascar

14. Translation in the world multiple

Keiichi Omura is Professor in Anthropology at the Open University of Japan. He is the author of Kanada inuito no minzokushi: Nichijoteki jissen no dainamikusu (Ethnography of Canadian Inuit: Dynamics of Everyday Practices) (Osaka University Press, 2013). He is currently interested in the ethnographic study of Canadian Inuit language and knowledge, their subsistence, Inuit ways of life and social relations, and comparative studies of indigenous knowledge and modern science.

is Lecturer in Cultural Anthropology at Victoria University of Wellington, New Zealand. His research focuses on technology, cybernetics, and media in Japan and North America. He is currently finishing a book manuscript entitled Human and Machine in Formation: An Ethnographic Study of Communication and Humanness in a Wearable Technology Laboratory in Japan.

is Associate Professor of Anthropology at the University of Toronto, Canada. She is the author of Nature in Translation: Japanese Tourism Encounters the Canadian Rockies (Duke University Press, 2015). She is currently preparing a book manuscript tentatively entitled The Charisma of Wild Mushrooms: Undoing the Twentieth Century.

is Associate Professor of Anthropology and Science, Technology and Culture at Osaka University, Japan. In the past several years he has been exploring the global network of hydrology and water management technology, particularly the travel of technologies, ideas, and expertise among Denmark, Japan, the Netherlands, and Thailand. In this research he is particularly focusing on simulation technologies and cultural imagination about landscape transformations in the Anthropocene.