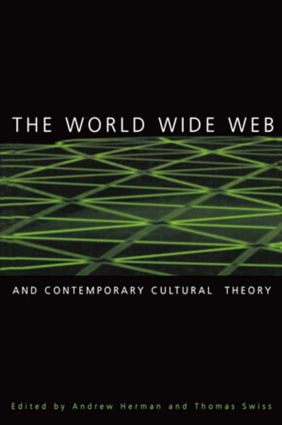 Engaging the thematic issues of the Web as a space where magic, metaphor, and power converge, the chapters cover such subjects as The Web and Corporate Media Systems, Conspiracy Theories and the Web; The Economy of Cyberpromotion, The Bias of the Web, The Web and Issues of Gender, and so on.

"The World Wide Web and Contemporary Cultural Theory is part of a welcome academic move toward synthesizing cultural and political economy approaches… the collection as a whole is a more complex and nuanced description of the Web than many recent explorations of new information and technologies." -- Ken Hillis, Topia, A Canadian Journal of Cultural Studies

"…a collection of lively, interesting essays examining such matters as the material production of the Web, the nature and circulation of its content, and how it is consumed." -- Resource Center for Cyberculture Studies

"The book will be newsworthy for readers interested in a cultural studies approach to Internet-based phenomena." -- Resource Center for Cyberculture Studies

"Must reading for any upper-level undergraduate or graduate-level course on computer-mediated communication." -- Choice

"It is about time that the Web and the internet are theorized this side of euphoria! The Herman and Swiss collection contains valuable meditations on the impact of the Web on society and culture, shorn of the cheerleading of Wired magazine, Negroponte, Turkle, and Gates. The book is rich in theoretical insight and empirical detail, unfolding from a stage-setting theoretical paper by Robert McChesney that situates the Web in corporate, global capitalism. This chapter alone makes the book worth buying." -- Ben Agger, Enculturation

"This book is iseful for poeple trying to derive meaning from the behavior, technology and application of not only the World Wide Web but the associated Internet, as well as electronice media in general"." -- Social Science Computer Review

"This book is iseful for poeple trying to derive meaning from the behavior, technology and application of not only the World Wide Web but the associated Internet, as well as electronice media in general"." -- Social Science Computer Review Wide Web

"The opening essay by Robert McChesney is essential reading…the anthology as a whole would be useful to students and scholars from a range of disciplines and levels of study." -- Megan Mullen, Communication Booknotes Quarterly

Andrew Herman is Associate Professor of Sociology and Cultural Studies at Drake University. He is the author of The "Better Angels" Of Capitalism: Rhetoric, Narrative and Moral Identity Among Men Of The American Upper Class (Westview, 1998) and the forthcoming book, The "Goods "Life: Consumer Culture and Moral Identity in Contemporary America (Blackwell).

Thomas Swiss is Center for the Humanities Professor of English and Director of the Web-Assisted Curriculum at Drake University. He is the author of two collections of poems, including Rough Cut (Illinois UP, 1997). He is editor or co-editor of a number of books, including Key Terms for Popular Music and Culture (Blackwell, 1999). Herman and Swiss, with John H. Sloop, previously co-edited Mapping The Beat: Contemporary Theory And Popular Music (Blackwell, 1998).