The World of Child Labor
An Historical and Regional Survey 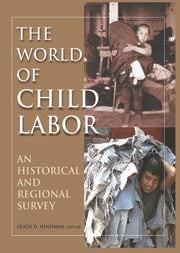 The World of Child Labor: An Historical and Regional Survey

"The World of Child Labor" details both the current and historical state of child labor in each region of the world, focusing on its causes, consequences, and cures. Child labor remains a problem of immense social and economic proportions throughout the developing world, and there is a global movement underway to do away with it. Volume editor Hugh D. Hindman has assembled an international team of leading child labor scholars, researchers, policy-makers, and activists to provide a comprehensive reference with over 220 essays. This volume first provides a current global snapshot with overview essays on the dimensions of the problem and those institutions and organizations combating child labor. Thereafter the organization of the work is regional, covering developed, developing, and less developed regions of the world.The reference goes around the globe to document the contemporary and historical state of child labor within each major region (Africa, Latin and South America, North America, Europe, Middle East, Asia, and Oceania) including country-level accounts for nearly half of the world's nations. Country-level essays for more developed nations include historical material in addition to current issues in child labor. All country-level essays address specific facets of child labor problems, such as industries and occupations in which children commonly work, the national child welfare policy, occupational safety regulations, educational system, and laws, and often highlight significant initiatives against child labor.Current statistical data accompany most country-level essays that include ratifications to UN and ILO conventions, the Human Development Index, human capital indicators, economic indicators, and national child labor surveys conducted by the Statistical Information and Monitoring Program on Child Labor. "The World of Child Labor" is designed to be a self-contained, comprehensive reference for high school, college, and professional researchers. Maps, photos, figures, tables, references, and index are included.

This book traces the relationship between ideas and methodological perspectives in economics to the fields of philosophy and the physical sciences. It is aimed at students of economics who want to learn about the philosophical underpinnings and scientific foundations of contemporary economic theory. The authors show how advances in scientific knowledge have had an impact on philosophy that in turn influenced the development of economic thought.