The World of the Tavern
Public Houses in Early Modern Europe 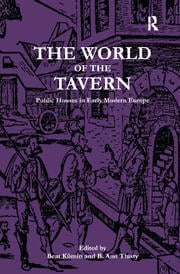 The World of the Tavern: Public Houses in Early Modern Europe

The subject of drink received a great deal of attention from early modern Europeans. Preachers, physicians, authorities, artists and travellers all addressed it from a range of different perspectives. At the same time, inns, taverns and alehouses served as multifunctional centres in towns and villages throughout Europe. This combination resulted in a wealth of sources, both institutional and cultural, which are only now beginning to be explored. This anthology features new research on public houses in England, Russia and the German lands. In a series of general, thematic and regional studies, contributors engage with broader debates in early modern history, shedding light on such key issues as consumption, travel and communication, state building, confessional identity, fiscal practice, gender and household relations, and the use of public spaces. The result is a volume that should appeal to anybody with an interest in early modern cultural history.

'... this new volume, which brings together a range of articles on English and continental drinking houses from the Reformation to the start of the nineteenth century, is very welcome...' English Historical Review 'This is certainly a collection which I would recommend, and not solely to those interested in the early modern period, for [...] the comparative perspective in time is equally valuable to that in space.' Cultural and Social History '... historians, art historians, and literary scholars will find much that is useful in this fine study.' Sixteenth Century Journal