Theatre and Culture in Early Modern England, 1650-1737
From Leviathan to Licensing Act 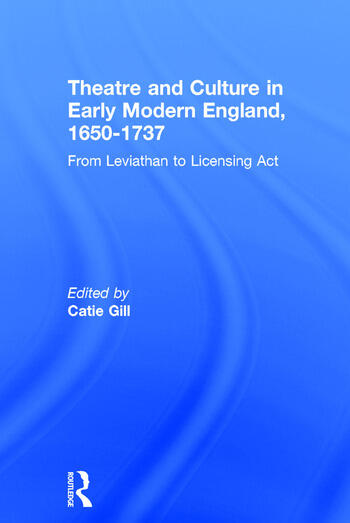 Theatre and Culture in Early Modern England, 1650-1737: From Leviathan to Licensing Act

Framed by the publication of Leviathan and the 1713 Licensing Act, this collection provides analysis of both canonical and non-canonical texts within the scope of an eighty-year period of theatre history, allowing for definition and assessment that uncouples Restoration drama from eighteenth-century drama. Individual essays demonstrate the significant contrasts between the theatre of different decades and the context of performance, paying special attention to the literary innovation and socio-political changes that contributed to the evolution of drama. Exploring the developments in both tragedy and comedy, and in literary production, specific topics include the playwright's relationship to the monarch, women writers' connection to the audience, the changing market for plays, and the rise of the bourgeoisie. This collection also examines aspects of gender and class through the exploration of women's impact on performance and production, masculinity and libertinism, master/servant relationships, and dramatic representations of the coffee house. Accompanied by a list of Spanish-English plays and a chronology of monarch's reigns and significant changes in theatre history, From Leviathan to Licensing Act is a valuable tool for scholars of Restoration and eighteenth-century performance, providing groundwork for future research and investigation.

Contents: Introduction, Catie Gill; What do the servants know?, Paddy Lyons; Flinging the book away: books, reading and gender in the Restoration stage, Jacqueline Pearson; Coffee-houses and Restoration drama, Juan A. Prieto-Pablos; Sex and tyranny revisited: Waller's The Maid's Tragedy and Rochester's Valentinian, Sandra Clark; Sex, tyranny and the problem of allegiance: political drama during the Restoration, Warren Chernaik; The adaptation of 17th-century Spanish drama to the English stage during the Restoration period: the case of ChalderÃ³n, Jorge Braga Riera; The female wits: women writers at work, Jane Milling; 'Jilting jades'? Perceptions of female playgoers in the Restoration, 1660-1700, Fiona Ritchie; Revolution and the moral reform of the stage: the case of Durfey's The Marriage-Hater Matched (1692), MarÃ­a José Mora and Manuel J. GÃ³mez-Lara; Works cited; Index.

’... the ideas and observations found throughout this collection pivot future readings of the period’s drama, and English culture more broadly, in small but important ways.’ Journal of British Studies '... this volume contains a good deal of work that will be of value to specialists working on the particular plays, playwrights and themes that are analysed in the individual essays. Moreover, scholars grappling with the representation of gender in our period will find much to reward their curiosity here.' Restoration and Eighteenth-Century Theatre Research