Themes and Flux in British Politics
Evolution, Change and Turbulence 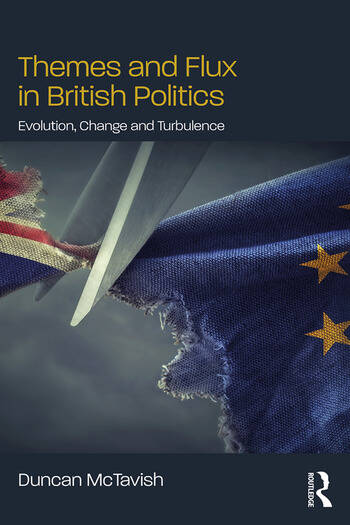 Themes and Flux in British Politics: Evolution, Change and Turbulence

Themes and Flux in British Politics provides readers with an engaging and informative overview of the development, change and turbulence in British politics today. It explores the extent to which the ‘old approaches’ to politics and policy are becoming less relevant in the contemporary and emerging UK environment and makes sense of the most significant aspects of the moment: political and electoral alignment, referenda, Brexit and the EU, relationship between UK and devolved governments, and key impact-related developments internationally. As such, it is an essential read for students and observers of British political life who need pointed, expert coverage to help make sense of these exceptional political times.

With a tripartite structure, the book first examines trends in political representation with changes in political engagement, party loyalties and electoral alignment, then places this within the turbulence and changing landscape of the policy/political environment, and finally contextualises the developments in British politics vis-à-vis international resonances and parallels. Case studies of the Scottish independence referendum, referendum to remain in or leave the EU and the EU withdrawal process are used to illustrate the key concepts and arguments advanced and to provide a sense of the current dynamic of British politics.

Themes and Flux in British Politics represents a timely response to contemporary debates about the major shifts (perhaps crises) of political parties and representation and the turbulent landscape of public policy, and will be essential reading for British politics and government, Brexit, public policy and EU politics.

1. Defining Britain: Home and Away

Conclusion: British Politics in a Changing and Turbulent Environment

"This book is a complete and brilliant introduction to British politics. The distinctive angle of how the two referenda unfolded (on Scottish independence in 2014 and on leaving the EU in 2016) sheds additional light on key dynamics of politics in the UK provide a distinctive viewpoint which adds to the brilliance of the book. A must read." – Edoardo Ongaro, The Open University, UK

"This book is essential reading for anyone who wishes to properly understand the high drama of British politics today. McTavish’s contribution is to locate the big events of our time in larger historical and theoretical context and to allow the reader to understand them through a range of political science and public management perspectives. This is the book of an inter-disciplinary expert at the top of his game." – Alastair Stark, University of Queensland, Australia

"What we learn from history is that we do not learn from history. The book, Themes and Flux in British Politics, provides exceptional historical insights to understanding contemporary political issues and policy disjuncture’s such as Brexit. The book is a de force of British politics and a must-read. There is a valuable analysis of key political developments to transformative events such as decline of Empire, the UK entry to the European Community, to major shifts in social and economic policy by successive UK governments. The book contextualises current political polarities and disenchantment with mainstream politics, parties, media and political representation concluding with valuable insights about the rise of populism and nationalism, and the future of a turbulent political landscape." – Karen Johnston, University of Portsmouth, UK

"This book provides a clear, insightful and yet scholarly overview of the British constitutional order in the age of Brexit and at a time when political polarisation and other centrifugal forces is threatening the very existence of the UK. An important book that deserves a wide readership beyond academia." – Matt Qvortrup, University of Coventry, UK

"During times of political crisis, it is important to take a step back and consider its wider context. McTavish does it admirably by situating key events – referendums on Scottish independence and Brexit – in a wider context. His analysis of economic shocks and 'wicked' problems reminds us of a world beyond short term and adversarial politics." – Paul Cairney, University of Stirling, UK