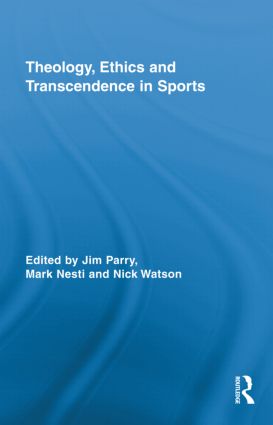 Theology, Ethics and Transcendence in Sports

This book provides an inter-disciplinary examination of the relationship between sport, spirituality and religion. It covers a wide-range of topics, such as prayer and sport, religious and spiritual perspectives on athletic identity and ‘flow’ in sport, theological analysis of genetic performance enhancement technologies, sectarianism in Scottish football, a spiritual understanding of sport psychology consultancy in English premiership soccer and how Zen may be useful in sports performance and participation. As modern sport is often intertwined with commercial and political agendas, this book also provides an important corrective to the “win at all costs” culture of modern sport, which cannot always be fully understood through secular ethical inquiry. This is a unique and important addition to the current literature for a wide-range of fields including theology and religious studies, psychology, health studies, ethics and sports studies.

"This collection of eleven papers … comprises one of the first forays at the intersection of theology and sport as interdisciplinary fields of inquiry. Editor Watson’s helpful introduction situates the broader scholarly context for an appreciation of what the volume achieves both for theologians and for sport researchers, scholars, and students. Three parts—titled "Theological Ethics in Sport," "Psychological and Spiritual Dimensions of Sport," and "Transcendence in Movement, Play, and Sport"—structure the volume, with the four chapters in part I and the three in part II engaging predominantly with Christian theological themes amidst a wide range of topics … The cumulative effect of these pages suggests, for theologians and scholars of religion, the promise of what might be called a "sport hermeneutic" with which to reengage various scriptural and theological traditions, and contributes, for those working in the field of sport, to the emergence of a post-positivist paradigm that seeks to transcend materialistic and naturalistic presuppositions in the analysis of sport." – Professor Amos Yong, Religious Studies Review

"This work of collected essays is the fourth publication in a series called Routledge research in sport, culture and society … All the essays were first presented as papers at the Inaugural International Conference on Sport and Spirituality hosted by the Centre for the Study of Sport and Spirituality, York St. John University, UK in August of 2007. More can be read about the significance of this conference and the general theme of religion, spirituality and sport in the informative Introduction written by Nick Watson that includes an extensive bibliography … Theology, Ethics and Transcendence in Sports [is] a work that is a must reading for those with an interest in the nexus between religion, spirituality, ethics and sport." – Professor Danny Rosenberg, Journal of the Philosophy of Sport

"This is a fine book, thoughtful and provocative, raising a host of important and stimulating issues. It is good quality "theoretical-practical theological reflection." Good quality theological reflection on sport is long overdue …  The eleven essays cover issues from the very specific experience of an individual elite athlete (Lawrence) to the almost universal experience of merely walking (Jirásek), from the common experience of Christians praying with respect to their sport (Hoffman) to esoteric reflection on divine energy ultimately issuing in play (Saint Sing) and from conservative Christianity (Watson)." – Professor Drew Gibson, Practical Theology

"Theology, Ethics, and Transcendence in Sports is a collection of essays that seeks ‘to provide a multi- and interdisciplinary examination of the relationship between sport, spirituality, and religion’ (p. 10). In the ‘Introduction’, Nick Watson provides an overview of the field of religion and sport and also introduces the reader to the various lenses through which the academic study of sport has been viewed … The editors do achieve their goal of providing an interdisciplinary look into the relationship of religion and sport in ways not often considered, even by academics … If it were used in the classroom … the various chapters could be assigned independently of each other or grouped together as they are in the three different sections. Most of the essays are sure to provoke lively discussions among those interested in sport or religion and can serve as helpful tools for better understanding the human condition." – Professor Greg Sapp, Sport and Society

Jim Parry is Senior Lecturer in the Department of Philosophy at Leeds University. He is the co-author of The Olympic Games Explained and co-editor of Ethics and Sport (both published by Routledge).