Theories and Origins of the Modern Police 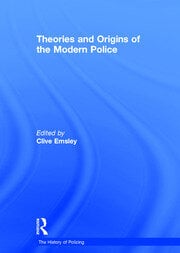 Theories and Origins of the Modern Police

This volume is the first of four that will provide some of the most significant, English-language articles on the historical development of the police institution. The articles included in this volume are broadly of two kinds. The first introduce some of the theoretical outlines that have been suggested for the origins and development of modern police institutions across Europe. The second explore the systems of enforcement, and the criticisms of them, that had emerged on the eve of the revolutionary upheavals which convulsed Europe and inflicted a terminal blow to the ancien régime at the close of the eighteenth century.

Contents: Introduction; Part I: Theory: Preventive principle of police, Charles Reith; Ideology as history: a look at the way some English police historians look at the police, Cyril D. Robinson; The demand for order in civil society: a review of some themes in the history of urban crime, police and riot, Allan Silver; The police and political development in Europe, David H. Bayley; Polizei, Franz-Ludwig Knemeyer. Part II: Policing Continental Europe: 'Police' and the formation of the modern state: legal and ideological assumptions on state capacity in the Austrian lands of the Habsburg empire, 1500-1800, Roland Axtmann; Fear and loathing in Bologna and Rome: the Papal police in perspective, Steven Hughes; The police of 18th-century France, Iain A. Cameron; The 'private army' of the tax farms: the men and their origins, Earl Robisheaux. Part III: Constables and Order in Early Modern England: The old-time constable as portrayed by the dramatist, A.M.P.; The English village constable, 1580-1642: the nature and dilemmas of the office, Joan Kent; Two concepts of order: justices, constables and jurymen in 17th-century England, Keith Wrightson. Part IV: Policing 18th-Century England: 'Civic' police and the condition of liberty: the rationality of governance in 18th-century England, Francis M. Dodsworth; Social police and the mechanisms of prevention: Patrick Colquhoun and the conditions of poverty, Mark Neocleous; Good men to associate and bad men to conspire: associations for the prosecution of felons in England, 1760-1860, David Philips; Sir John Fielding and the problem of criminal investigation in 18th-century England, John Styles; 'An imperfect, inadequate and wretched system'? Policing London before Peel, Ruth Paley; The military and popular disorder in England, 1790-1801, Clive Emsley; The Bank of England and the policing of forgery, 1797-1821, Randall McGowen; Name index.

Clive Emsley is Professor of History at The Open University, UK