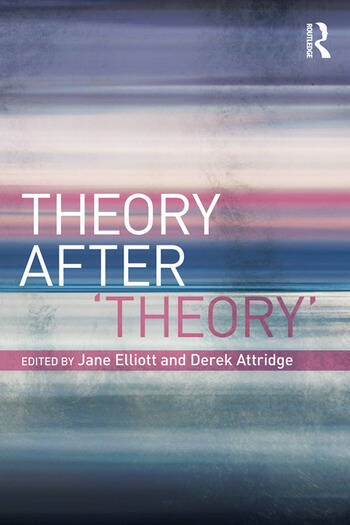 This volume argues that theory, far from being dead, has undergone major shifts in order to come to terms with the most urgent cultural and political questions of today. Offering an overview of theory’s new directions, this groundbreaking collection includes essays on affect, biopolitics, biophilosophy, the aesthetic, and neoliberalism, as well as examinations of established areas such as subaltern studies, the postcolonial, and ethics.

Influential figures such as Agamben, Badiou, Arendt, Deleuze, Derrida and Meillassoux are examined in a range of contexts. Gathering together some of the top thinkers in the field, this volume not only speculates on the fate of theory but shows its current diversity, encouraging conversation between divergent strands. Each section places the essays in their contexts and stages a comparison between different but ultimately related ways in which key thinkers are moving beyond poststructuralism.

Jane Elliott is Lecturer in the Department of English and Related Literature at the University of York. She is the author of Popular Feminist Fiction as American Allegory: Representing National Time (Palgrave 2008), and her essays have appeared in Cultural Critique, Modern Fiction Studies, Novel and the PMLA. She is currently at work on a project on neoliberalism, choice and the novel.

Derek Attridge is Professor in the Department of English and Related Literature at the University of York. Among his books are Peculiar Language: Literature as Difference from the Renaissance to James Joyce (Routledge, 1988), The Singularity of Literature (Routledge, 2004), J. M. Coetzee and the Ethics of Reading: Literature in the Event (Chicago, 2004), and Reading and Responsibility: Deconstruction’s Traces (Edinburgh, 2010). Edited and co-edited volumes include Post-structuralist Joyce: Essays from the French (Cambridge, 1984), Post-structuralism and the Question of History (Cambridge, 1987), and Acts of Literature by Jacques Derrida (Routledge, 1992).