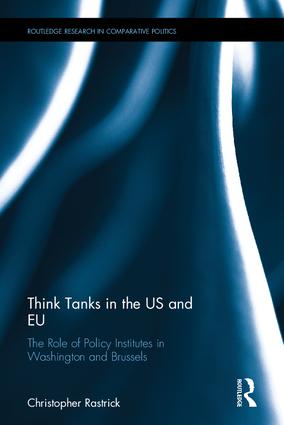 Think Tanks in the US and EU

The Role of Policy Institutes in Washington and Brussels, 1st Edition

Why do US and EU think tanks diverge in their roles, priorities, and main constituencies? Providing the first substantive analytical comparison of think tanks in Washington and Brussels, this book explores the differences that exist and why they developed.

Two principal variables are identified – institutional credibility and political culture – as a measure of comparison between the two think tank models. Supranational think tanks have an inherent credibility with the institutions of the EU, which allows them to direct their resources and efforts to activities and outputs where they hold a comparative advantage. US think tanks lack such institutional recognition and so need to prove their credibility to their main constituencies. The result is that an adversarial and individualistic political culture has informed the norms and activities of Washington think tanks while the consensus-driven and collectivist political culture of Europe has influenced supranational think tanks. Think tanks are far from newcomers to the public policy scene, but our broader understanding of their role, structure and how they assess their own achievements is not yet fully developed.

By providing a framework within which to analyse this, this book will be of interest to academics, students and policy experts working within public policy, comparative politics and political science more generally.

"A thoughtful, intelligent and meticulously-researched volume which offers a wealth of comparative insights on the role and reach of think tanks in the EU and the US. Rastrick's study unearths new ground on how think tanks on both sides of the Atlantic generate and disseminate ideas to multiple stakeholders. Destined to enjoy a very long shelf life." - Donald E. Abelson, The University of Western Ontario

"This book makes a welcome and important contribution to our understanding of the significant differences that exist between American think tanks and those EU-focussed think tanks based in Brussels. Rastrick's analysis is clear, systematic and full of interesting insights into the cultural and structural causes that explain these differences. Anyone who wishes to understand how and why the think tank worlds of DC and Brussels differ needs to read to this book." - Stephen Brooks, University of Windsor (Canada) and University of Michigan (US)

Chapter 2 – The Roles and Goals of American Think Tanks

Chapter 3: How Do American Think Tanks Gauge Their Success?

Chapter 4: The Roles and Goals of Supranational Think Tanks

Chapter 5: How do Supranational Think Tanks Gauge Their Success?

Chapter 6: How do American and Supranational Think Tanks Differ?

Chapter 7: Why are American and Supranational Think Tanks Different, and What are the Implications?

Christopher J. Rastrick received his PhD in political science from the University of Western Ontario, in London, Canada. He regularly writes on public policy issues in Canada and beyond, appearing in the nation's top newspapers and journals. His academic research interests include think tanks, Canada–EU relations, and regional integration initiatives.