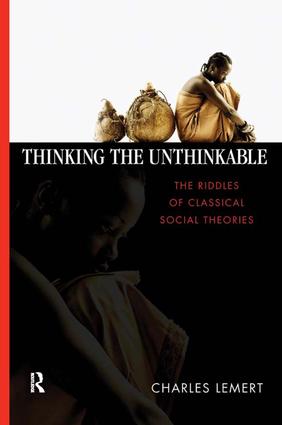 In the eloquent style for which he has become famous, Charles Lemert writes of social theory as no one else. Thinking the Unthinkable is offered as text for instruction, yet it defies the prevailing assumption that social theory is a method for clarifying the facts of social life. Lemert shows how social theory began late in the 19th century as a struggle to come to terms with the failure of modern reason to solve the social problems created by the capitalist world-system. Since then, social theory has developed through twists and turns to think and rethink this Unthinkable. Hence the surprising innovations of recent years-postmodern, queer, postcolonial, third-wave feminist, risk theories, among others arising in the wake of globalization. Once again, Lemert has made the difficult clear in a book that students and other readers will treasure and keep.

“An often profound, sometimes melancholic, and always elegant meditation on classical social theory, which is defined, according to Lemert, by its courageous and insistent effort to comprehend the irrationality that has threatened modern humankind.”

“Charles Lemert has already given sociologists great books that have profoundly changed how we teach social theory. He has done it again. With Thinking the Unthinkable he offers a concise but rich review of the riddles that engaged classical social theorists and which confront us still today. The reader is introduced to a diverse group of classical social theorists, given a sense of the expanse of their thought and a taste of their writings. There even is a glossary of the most important of their concepts. Just right for the classroom. Just right for these times.”

“Vintage Lemert. There is sophistication underlying his literary flair for down to earth writing. This book is an erudite and engaging meditation on the lessons Lemert has derived from his sustained engagement with a diverse array of writers who have changed how we think about social things.”

Preface PART I: WHAT IS SOCIAL THEORY? Total Destruction, Bead Lust, and Other Unreasonable Social Things Chapter 1: The Impossible Reasons of Modern Civilizations Chapter 2: Social Theory and Modernity's Unthinkable Chapter 3: Social Violence as the Bread Lust of the Unthinkable Chapter 4: Five Ways to Skin a Cat: Modernity's Five Riddles PART II: UNTHINKABLE SOCIAL THINGS Five Solutions to the Riddle of the Defiant Darkness, 1848-1914 Light and Dark Chapter 5: Revolutionary Reasons: Karl Marx and the Melting of Solid Modernity Chapter 6: Rationality's Double-Bind: Max Weber and Modernity's Threat to Human Spirit Chapter 7: The Reasonable hope of a Social Bond: Emile Durkheim and Modern Man's Trouble with Conflict Riddles and Realities Chapter 8: Perverse Reasons: Sigmund Freud and the Discontents of Conscious Life Chapter 9: Unreasonable Differences: Charlotte Perkins Gilman and the Logic of the Feminist Standpoint PART III: THE EXILED OTHERS THINK THE UNTHINKABLE The Classic Solutions Encounter Differences and Possibilities Unthinkable Variations on the Classic Riddles: W. E. B. Du Bois, Anna Julia Cooper, Georg Simmel, and Ferdinand de Saussure Chapter 10: Beyond the Double Blind: W. E. B. Du Bois and the Gift of Second-Sight Chapter 11: A Revolutionary Social Bond: Anna Julia Cooper and the Colored Woman's Office Chapter 12: The Strange Social Benefits of Conflict: Georg Simmel and Modern Wandering Chapter 13: The Social Structure of Meanings: Ferdinand de Saussure and the Arbitrary Sign Violence, War, and the Short Twentieth Century, 1914-1991 Chapter 14: The Unfolding of Social Theory in the Unraveling of the Twentieth Century into the Twenty-First Bibliographic Essay and Other Acknowledgments Index About the Author