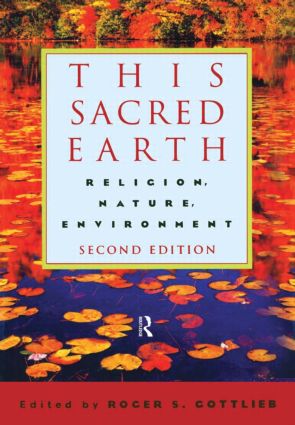 Updated with nearly forty new selections to reflect the tremendous growth and transformation of scholarly, theological, and activist religious environmentalism, the second edition of This Sacred Earth is an unparalleled resource for the study of religion's complex relationship to the environment.

"The updated edition of This Sacred Earth brings together an impressive selection of recent insights on Religion As If the Earth Mattered. We dare not settle for less." -- Charlene Spretnak, author of The Resurgence of the Real

"A rich and valuable compendium assembled around the premise that Judeo-Christian belief is moving from belief to disbelief in the inherent value of earth and its creatures. Writings that support this premise in the central text are introduced with spiritual and nature writings and followed by writings from Islamic, Hindu, Buddhist, Animal Rights, Ecofeminist and Deep Ecology perspectives. A fine sourcebook for a wide range of religious and spiritual environmental writings." -- Calvin B. DeWitt, University of Wisconson-Madison

"I welcome this second edition of This Sacred Earth, more comprehensive and inclusive than ever, probing the opportunities--and the pitfalls--in bringing religious experience to bear on caring for nature. Can Earth's marvelous religious diversity help to save Earth and its marvelous biodiversity? We can inherit the Earth only in justice and love. The promise of religion is splendidly and urgently documented here." -- Holmes Rolston, III, University Distinguished Professor Colorado State University

"The Second Edition of This Sacred Earth documents the exponential acceleration of the greening of religion. Back in 1967, Lynn White Jr. could plausibly claim that the "historical roots of our ecologic crisis" were the Abrahamic religions. Now those religions and practically all the others of the world are uniting to resist the real roots of our ecologic crisis, the worship of Mammon and the cult of Consumerism. Roger Gottlieb has done a masterful job in covering the diversity of the spiritual responses to this newest form of idolatry--from traditional world religions such as Judaism, Christianity, Islam, Hinduism, and Buddhism to new ecology-inspired spiritual movements such as Deep Ecology and Ecofeminism. It remains THE TEXTBOOK for college courses that focus on the link between religion and environment." -- J. Baird Callicott Professor of Philosophy and Religion Studies University of North Texas

Roger S. Gottlieb is Professor of Philosophy at Worcester Polytechnic Institiute and is widely recognized for his work in environmentalism. He has a regular column in Tikkun, and has published in popular venues such as the Sunday Boston Globe and Orion Afield. He has written and edited books on Marxism, Religion and Environmentalism.