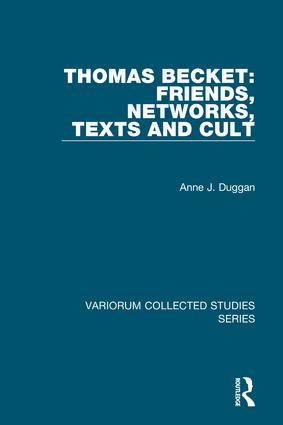 Becket's life was lived on a European stage, his cause was conducted in a European setting, and the cult of the new martyr spread with extraordinary rapidity to the furthest reaches of Latin Christendom before the end of the twelfth century. The fifteen studies collected here reflect not only the global reach of the subject but the diverse expertise of their author, whose edition and translation of the Correspondence of Archbishop Thomas Becket (2000) and acclaimed biography (Thomas Becket, 2004) have established her place in Becket studies. Based on the critical examination of manuscripts and texts, this collection focuses first on the papal curia and Becket's household in exile. The following studies deal with Becket's letters and their authorship, the coronation of the young King Henry (1170), and Henry II's reconciliation at Avranches (1172). The final part traces the explosion of Becket's cult, the transmission of hagiographical and liturgical texts to France, Germany, and Portugal, and the role of diverse agencies of dissemination: Henry II's daughters, for example, in Saxony, Castile, and Sicily, and the Cistercian and Augustinian orders whose networks of houses embraced the whole of Europe.

’Anne Duggan's established reputation as an authority on Thomas Becket is further justified in this work. …the book provides an excellent and exhaustive study of the life, death, and cult of Becket, portraying a vivid picture of the fascinating cleric who was pivotal in the political, social, and ecclesiological development of medieval Europe.’ Medium Aevum

Contents: Preface; Part I Friends and Networks: Thomas Becket's Italian network; John of Salisbury and Thomas Becket; The price of loyalty: the fate of Thomas Becket's learned household. Part II Letters and Texts: Classical quotations and allusions in the correspondence of Thomas Becket: an investigation into their sources; Authorship and authenticity in the Becket correspondence; The coronation of the young king in 1170; Diplomacy, status and conscience: Henry II's penance for Becket's murder; Ne in dubium. The official record of Henry II's reconciliation in Avranches, 21 May 1172. Part III Cult: The cult of St Thomas Becket in the 13th century; Aspects of Anglo-Portuguese relations in the 12th century. Manuscripts, relics, decretals and the cult of St Thomas Becket at LorvÃ£o, AlcobaÃ§a and Tomar; A Becket office at Stavelot: London, British Library additional ms 16964; The LorvÃ£o transcription of Benedict of Peterborough's Liber miraculorum beati Thome: Lisbon, cod. AlcobaÃ§a ccxc/143; The Santa Cruz transcription of Benedict of Peterborough's Liber miraculorum beat Thome: Porto, BPM, cod. Santa Cruz 60; The Salem FitzStephen: Heidelberg UniversitÃ¤ts-Bibliothek cod. Salem ix.30; The Lyell version of the Quadrilogus Life of St Thomas of Canterbury; Addenda and corrigenda; Index.