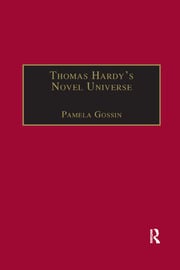 In this, the first book-length study of astronomy in Hardy's writing, historian of science and literary scholar Pamela Gossin brings the analytical tools of both disciplines to bear as she offers unexpected and sophisticated readings of seven novels that enrich Darwinian and feminist perspectives on his work, extend formalist evaluations of his achievement as a writer, and provide fresh interpretations of enigmatic passages and scenes. In an elegantly crafted introduction, Gossin draws together the shared critical values and methods of literary studies and the history of science to articulate a hybrid model of scholarly interpretation and analysis that promotes cross-disciplinary compassion and understanding within the current contention of the science/culture wars. She then situates Hardy's own deeply interdisciplinary knowledge of astronomy and cosmology within both literary and scientific traditions, from the ancient world through the Victorian era. Gossin offers insightful new assessments of A Pair of Blue Eyes, Far from the Madding Crowd, The Return of the Native, Two on a Tower, The Woodlanders, Tess of the D'Urbervilles, and Jude the Obscure, arguing that Hardy's personal synthesis of ancient and modern astronomy with mythopoetic and scientific cosmologies enabled him to write as a literary cosmologist for the post-Darwinian world. The profound new myths that comprise Hardy's novel universe can be read as a sustained set of literary thought-experiments by which he critiques the possibilities, limitations, and dangers of living out the storylines that such imaginative cosmologies project for his time - and ours.

Contents: Prefaces. Part I Critical Methodology, Literary and Historical Background: Introduction: 'convergence of the twain': a personal perspective on the interdisciplinary study of literature and science; Literary history of astronomy and the origins of Hardy's literary cosmology; The other 'terrible muse': astronomy and cosmology from prehistory through the Victorian period. Part II Reading Hardy's Novel Universe: Hardy's personal construct cosmology: astronomy and literature converge; Celestial selection and the cosmic environment: A Pair of Blue Eyes, Far From the Madding Crowd, and The Return of the Native; The stellar dynamics of star-crossed love in Two on a Tower; Universal laws and cosmic forces: the tragic astronomical muse in The Woodlanders, Tess of the D'Urbervilles, and Jude the Obscure; Conclusion: moral astrophysics: myth, cosmos and gender in 19th-century Britain and beyond. Bibliography; Index.

Pamela Gossin, who holds a double PhD in History of Science and English from the University of Wisconsin-Madison, is Associate Professor of History of Science and Literary Studies and Director of Medical and Scientific Humanities (MaSH) at the University of Texas-Dallas. Her publications include An Encyclopedia of Literature and Science (2002) and numerous articles and chapters on the interrelations of literature, culture, and science.

Longlisted for the British Society for Literature and Science book prize of 2007. 'In this skillfully crafted and beautifully written book, Pamela Gossin bridges the two cultures of science and the humanities by analyzing Thomas Hardy’s astronomical allusions and placing them in the context of nineteenth-century ideas. Thomas Hardy’s Novel Universe provides a new approach to interpreting Hardy’s fiction against the background of what Hardy may have understood about the Victorian cosmos. This work will appeal not only to scholars in the history of science and literature, but will attract the general reader as well.' Marilyn Ogilvie, University of Oklahoma, USA ’... a fascinating and deeply illuminating book... excellent background material on the key intellectual issues of the day... I warmly recommend this work, not only to lovers of Hardy's novels, but also to anyone interested in the history of 19th-century astronomy and its place within the wider schema of the sciences as they were then understood. For Pamela Gossin's book is a well-written, jargon-free history of scientific and literary thought, as expressed through the writings of Thomas Hardy... This book is strongly commended to anyone interested in Thomas Hardy's writings and 19th-century astronomy generally.’ The Observatory ’Pamela Gossin's study of Thomas Hardy and astronomy is a pleasure to read and a welcome addition to the scholarship on Victorian science and literature. It will appeal both to literary scholars and historians of science. ...Gossin's sophisticated study of Hardy's astronomy and cosmology is to be read and admired.’ Victorian Studies