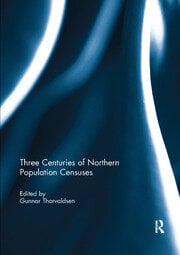 Over the last few decades, researchers in fields such as history, the social sciences and medicine have had improved access to census materials in northern Europe, making an update on these infrastructures both possible and topical. This book’s presentation of European census history and infrastructure is not strictly limited to northern Europe, although most of the Mosaic materials originated north of the forty-fifth parallel.

The template for modern census-taking was created by Adolphe Quetelet in Belgium in the 1830s, and his census standards were spread almost globally by the international statistical conferences. This book explores Icelandic residence patterns amongst the elderly; Siberian polygamy as indicated in the Polar Census; men’s living arrangements in Northern Norway; Sweden’s pioneering register-based census in 1930; unique source materials on the Soviet family; and data on Ukrainian and Russian population groups in the most recent Ukrainian censuses. All of these contributions stress the book’s focus on Northern European census data. This book was originally published as a special issue of The History of the Family.

6. Primary sources on the history of the Soviet family in the twentieth century: an analytical review Lyudmila Mazur and Oleg Gorbachev

7. Birthplaces, migration and identity in the 2001 census for Ukraine Gunnar Thorvaldsen