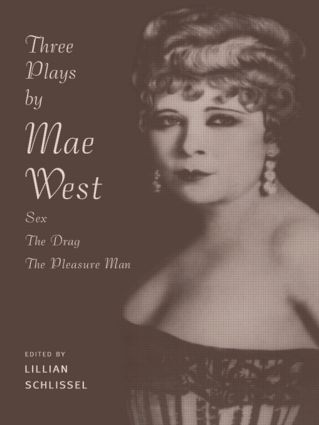 Mae West, wise-cracking vaudeville performer, was one of the most controversial figures of her era. Rarely, however, do people think of Mae West as a writer. In Three Plays By Mae West, Lillian Schlissel brings this underexplored part of West's career to the fore by offering for the first time in book form, three of the plays West wrote in the 1920s--Sex (1926), The Drag (1927) and Pleasure Man (1928). With an insightful introduction by Schlissel, this book offers a unique look into to the life and early career of this legendary stage and screen actress.

"…in a useful introduction, Schissel does a fine, readable history of both West and the theater of her day. …these plays…are fascinating windows into another time." -- Windy City Times

"This volume gives a glimpse of the real Mae West by publishing her three radical, melodramatic, but quite hilarious plays for the first time." -- Booklist

"No mere strutting sexpot, West's capacity for scathing satire comes into full view in Three Plays by Mae West, edited by Lillian Schlissel…Filled with the saucy argot of the New York streets, the plays still crackle and cook." -- Publisher's Weekly

"These plays are important, original and fun. Anyone interested in theatre and gender is going to have a new and bold face to deal with." -- Michael Cadden, Director of the Program in Theatre and Dance, Princeton University Mae West was many things-sexual outlaw, wildcat feminist, actress, icon. The publication of these plays proves that she was more complex than her movies suggest. The only thing she did straightforwardly was to insist that her convictions were worth fighting for…She was as close as any woman has ever come to being one of the great American queens.

"…we can look back at Mae West with new eyes, and admire the fun she had with sex and the control she exercised on her image and her career." -- The Boston Book Review

"I would recommend this book to anyone interested either in the history of gay theatre in America or in how gays were perceived in the early decades of the twentieth century." -- Marsh Cassady, Lambda Book Report