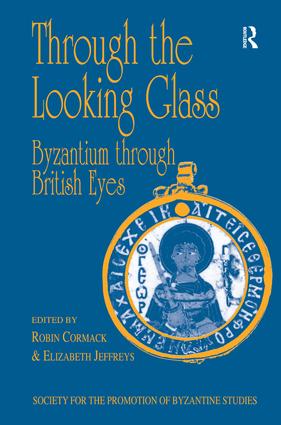 Through the Looking Glass: Byzantium through British Eyes

The papers in this volume derive from the 29th Spring Symposium of Byzantine Studies. This was held for the Society for the Promotion of Byzantine Studies in the University of London in March 1995, in order to complement the British Museum exhibition 'Byzantium. Treasures of Byzantine Art and Culture'. The objective of the symposium was to explore the ways in which British scholars, travellers, novelists, architects, churchmen and critics came into contact with Byzantium, and how they perceived what they saw. The present volume sets out some of the results of this enquiry. Byzantium is treated both as a source of influence on British culture as well as an 'idea' which British culture constructed in different ways in different periods of history. To give some comparative context, attention is also paid to attitudes towards Byzantium in continental Europe. Papers deal, amongst other topics, with the collecting of objects representative of Byzantine culture and with the changing appreciation of Byzantine manuscripts. They also include a series of case studies of individual historians and Byzantinists, and two deal in particular with Ruskin, who emerges as a perceptive 19th-century critic of Byzantine culture. Through the Looking Glass is volume 7 in the series published by Ashgate/Variorum on behalf of the Society for the Promotion of Byzantine Studies.

'The essays do indeed provide a worthwhile perspective on aesthetics, and I recommend them to all medieval architecture historians…. Books like these help us to be constructively self-conscious.' Aurora

Publications of the Society for the Promotion of Byzantine Studies

This series publishes a selection of papers delivered at the annual British Spring Symposium of Byzantine Studies, now held under the auspices of the Society for the Promotion of Byzantine Studies. These meetings began fifty years ago in the University of Birmingham and have built an international reputation. Themes cover all aspects of Byzantine history and culture, with papers presented by chosen experts. Selected papers from the symposia have been published regularly since 1992 in a series of titles which have themselves become established as major contributions to the study of the Byzantine world.