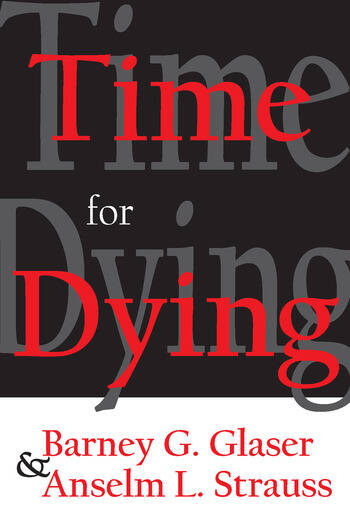 This book has been written for those who must work with and give care to the dying. Our discussion is not simple narrative or description; it is a "rendition of reality," informed by a rather densely woven and fairly abstract theoretical scheme. This scheme evolved gradually during the course of our research. The second audience for this volume is social scientists who are less interested in dying than they are in useful substantive theory. Our central concern is with the temporal aspects of work. The theory presented here may be useful to social scientists interested in areas far removed from health, medicine, or hospitals. The training of physicians and nurses equips them for the technical aspects of dealing with illness.

Medical students learn not to kill patients through error, and to save lives through diagnosis and treatment. But their teachers put little or no emphasis on how to talk with dying patients; how-or whether-to disclose an impending death; or even how to approach the subject with the wives, husbands, children, and parents of the dying. Students of nursing are taught how to give nursing care to terminal patients, as well as how to give "post-mortem care." But the psychological aspects of dealing with the dying and their families are virtually absent from training. Although physicians and nurses are highly skilled at handling the bodies of terminal patients, their behavior to them otherwise is actually outside the province of professional standards. Much, if not most, nontechnical conduct toward, and in the presence of, dying patients and their families is profoundly influenced by "common sense" assumptions, essentially untouched by professional or even rational considerations or by current advancement in social-psychological knowledge. The process of dying in hospitals is much affected by professional training and codes, and by the particular conditions of work generated by hospitals as places of work. A third important consideration in interpreting dying as a temporal process is that dying is a social as well as a biological and psychological process. The term "social" underlines that the dying person is not simply leaving life. Unless he dies without kin or friends, and in such a way that his death is completely undiscovered his death is recorded. His dying is inextricably bound up with the life of society, however insignificant his particular life may have been or how small the impact his death makes upon its future course. This aspect of dying is treated in relationship to what the authors call "status passage."

Time for Dying is an illumination of the temporal features of dying in hospitalsuas related both to the work of hospital personnel and to dying itself as a social process. Barney G. Glaser is the founder of the Grounded Theory Institute in Mill Valley, California, and has also been a research sociologist at the University of California Medical Center, San Francisco. He is the author or coauthor of several books, including The Grounded Theory Perspective II and Experts versus Laymen: A Study of the Patsy and the Subcontractor, published by Aldine Transaction. Anselm L. Strauss (1916-1996) was emeritus professor of sociology at the University of California, San Francisco. He was the author of numerous books, including Professions, Work and Careers, Mirrors and Masks: The Search for Identity, and Creating Sociological Awareness: Collective Images and Symbolic Representations, all published in new editions by Transaction.