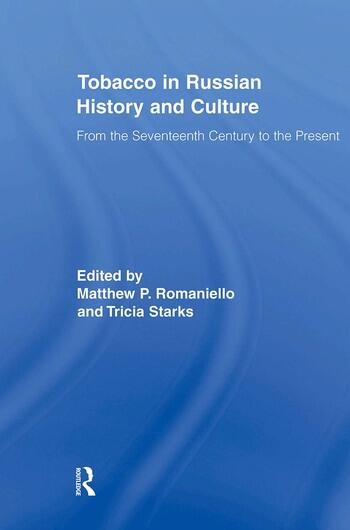 Tobacco in Russian History and Culture: The Seventeenth Century to the Present

According to the World Health Organization, approximately seventy percent of men and thirty percent of women in Russia smoke, and the WHO estimated that at the close of the twentieth century 280,000 Russians died every year from smoking-related illnesses – a rate over three times higher than the global average. The demographic crisis in current Russia has occasioned interest by President Putin in health care efforts and by historians in the source of these problems. Tobacco in Russian History and Culture explores tobacco’s role in Russian culture through a multidisciplinary approach starting with the growth of tobacco consumption from its first introduction in the seventeenth century until its pandemic status in the current post-Soviet health crisis.

The essays as a group emphasize the ways in which, from earliest contact, tobacco’s status as a "foreign" commodity forced Russians to confront their national, political, and economic interests in its acceptance or rejection and find there markers of gender, class, or political identity. International contributors from the fields of history, literature, sociology, and economics fully present the dramatic impact of the weed called the "blossom from the womb of the daughter of Jezebel".

Matthew P. Romaniello is Assistant Professor of History at University of Hawai‘i at Manoa. He has published several articles on the history of the Russian Empire, and is currently completing a monograph on Khanate of Kazan’ after the Muscovite conquest.

Tricia Starks is Associate Professor of History at University of Arkansas. She is the author of The Body Soviet: Propaganda, Hygiene, and the Revolutionary State, (2008). She is currently completing a monograph on the cultural history of cigarettes in the Soviet Union.

"This volume explores in considerable depth the unusual history of tobacco use in Russia, as compared to other countries. In so doing, as might be expected from the quotidian nature of the commodity in question, it also reveals some fascinating insights into wider Russian social and cultural attitudes. Although there are sixteen chapters from fifteen authors, which vary greatly in approach and focus, a thoughtful and active editoriaI process has moulded each discrete contribution to form a consistent and satisfying whole … This volume admirably achieves its stated aim of describing the trajectory of tobacco use in Russia, with a judicious combination of economic commentary, statistical analysis, and social history, creating a cohesive book that will pique the interest of anyone who studies the country, let alone the commodity."
– Russian Journal of Communication

"[T]he collection of papers put together by Matthew Romaniello and Tricia Starks constitutes a highly useful contribution to our knowledge. Standard Russian/ Soviet history books do not treat the subject of tobacco in any meaningful way. In addition to the generally high caliber of the scholarship, the editors have done an excellent job in recruiting papers that almost seamlessly cover the beginnings of tobacco use through the present day with all relevant periods covered."
– Slavic Review

"[T]here is much in this collection that will interest both economic and cultural historians, historians of medicine and students of contemporary Russian politics and society."
– Social History of Medicine

"One of the many fascinating aspects of this edited collection is the spotlight it throws on the role of Russia's European neighbours in encouraging the spread of tobacco use within Russia from the early modern period through to the Soviet era. … [A]s a whole, the book makes a substantial contribution to the cultural and economic history of Russia . Many of the chapters in the volume also give an insight into the enduring attraction of tobacco for its users, despite the best (or worst) efforts of the state."
– Medical History

"A collection of essays that explains the Russian love affair with tobacco is timely ... Matthew Romaniello and Tricia Starks initially assembled panels on the subject for the November 2007 meeting of the American Association for the Advancement of Slavic Studies. The resulting volume is a collection of chapters by mainly U.S. scholars (with input from Britain's Catriona Kelly, two Russian scholars, and the former director of the Moscow cigarette factory Iava), who analyze a fascinating topic from the various methodological approaches of economics, culture, consumerism, politics, policy and comparative history, international relations, and gender analysis. … This collection … suggests that Russia's tobacco history deserves further research."
– Business History Review