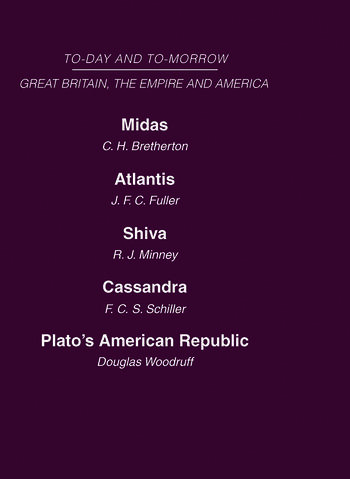 America and the Future

"Many hard things have been said about America, but few quite so bitter as these." Daily Sketch

In the turmoil and materialism of the United States the author sees the beginning of a new civilization which, if it can find its soul, is likely to exceed in grandeur anything as yet accomplished by the civilizations of the Old World.

Shiva or the Future of India

"Does not mince matters in the least." Daily Express

An experienced observer summarizes in this volume the prospects for the Indian people.

Cassandra or the Future of the British Empire

"…brilliantly written, it ought to be read by all shades of politicians." Yorkshire Post

"Yet another addition to that bright constellation of pamphlets." Spectator

A penetrating analysis of the disruptive influences of work in the Empire.

"A gently malicious wit sparkles on every page." Sunday Times

"Possibly no wittier satire has been penned in our generation…Rich in entertainment." Journal of Education

A series of witty dialogues in the Platonic manner, dealing with aspects of American life and manners.

Today and Tomorrow Volume 19 Great Britain, The Empire and America includes Atlantis, America and the Future by J F C Fuller, Shiva or the Future of India, by R J Minney, Cassandra or the Future of the British Empire by F C S Schiller and Plato’s American Republic by Douglas Woodruff. 506pp