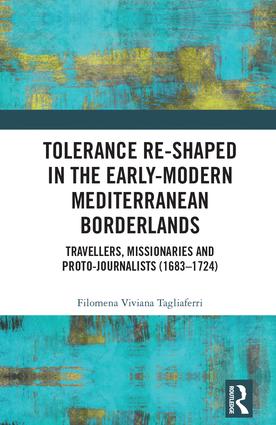 This book explores perceptions of toleration and self-identity through an analysis of otherness’ real experience of Italian travellers, Catholic missionaries and Maltese proto-journalists within Mediterranean border-spaces. Employing a multidisciplinary approach, which integrates the analysis of original and unpublished archival documentation with early modern European travel literature, the book shows how fluid subjects and border groups adapted to new environments, often generating information that made the Ottomans and their system of values real and dignified to an Italian audience. The interdisciplinary combining of historical methodology with the tools of comparative literature, anthropology and folklore studies provides a fresh perspective on concepts of tolerance as experienced in the early modern Mediterranean.

Part I: Toleration Before Tolerance and the Endurance of the Other: Narrations of Cultural Diversity and the Transfer of New Perspectives

1. Swinging or Suspended Minds?: Cultural and Methodological Approaches to Diversity in the Late 17th and Early 18th Centuries

2. Venezia, Finestra d’Oriente: The Venetian Stamperia Pittoni and the Spreading of Information from the East

Part II : Imperial Pragmatism, Minorities’ Weakness and Hybridization of Thought: Levantinization and the City of Izmir

4. A Chance for Diversity: Infidel Izmir and Ottoman Tolerance

5. From Weakness to Laissez-faire: Competition and Acceptance in the 17th-18th Century Catholic Mission of Izmir

6. Hybridizing Minds: The Levantinization of the Catholic Community of Izmir

Part III: Playing the Role of the Besieged Fortress, Sharing the Same Inter-Mediterranean Codes: Malta and the Familiarity of the Enemy

7. Another Kind of Border-Space: Fortified Malta in One Hundred Years of Travel Narrative (Late 17th and Late 18th Centuries)

8. In a World of News: The Flux of Early Modern Mediterranean Information and the Maltese Mindset

9. When the Crescent Became Delicatessen: Change in the Perception of the Other and Connected Destinies in Early 18th-Century Malta

Filomena Viviana Tagliaferri is Marie Curie Global Fellow at ISEM-CNR (Italy) and the University of Maryland.