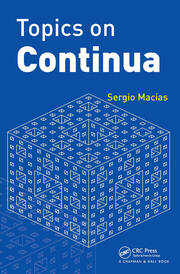 Specialized as it might be, continuum theory is one of the most intriguing areas in mathematics. However, despite being popular journal fare, few books have thoroughly explored this interesting aspect of topology.

In Topics on Continua, Sergio Macías, one of the field’s leading scholars, presents four of his favorite continuum topics: inverse limits, Jones’s set function T, homogenous continua, and n-fold hyperspaces, and in doing so, presents the most complete set of theorems and proofs ever contained in a single topology volume. Many of the results presented have previously appeared only in research papers, and some appear here for the first time.

After building the requisite background and exploring the inverse limits of continua, the discussions focus on Professor Jones's set function T and continua for which T is continuous. An introduction to topological groups and group actions lead to a proof of Effros's Theorem, followed by a presentation of two decomposition theorems. The author then offers an in-depth study of n-fold hyperspaces. This includes their general properties, conditions that allow points of n-fold symmetric products to be arcwise accessible from their complement, points that arcwise disconnect the n-fold hyperspaces, the n-fold hyperspaces of graphs, and theorems relating n-fold hyperspaces and cones. The concluding chapter presents a series of open questions on each topic discussed in the book.

With more than a decade of teaching experience, Macías is able to put forth exceptionally cogent discussions that not only give beginning mathematicians a strong grounding in continuum theory, but also form an authoritative, single-source guide through some of topology's most captivating facets.