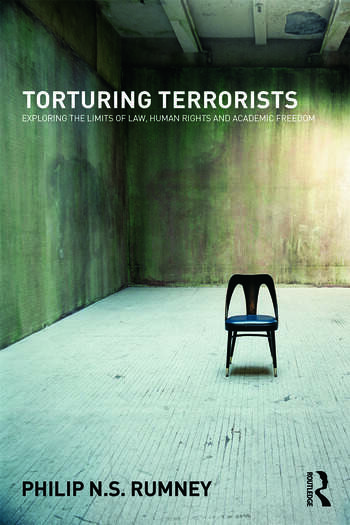 This book considers the theoretical, policy and empirical arguments relevant to the debate concerning the legalisation of interrogational torture. Torturing Terrorists examines, as part of a consequentialist analysis, the nature and impact of torture and the implications of its legal regulation on individuals, institutions and wider society. In making an argument against the use of torture, the book engages in a wide ranging interdisciplinary analysis of the arguments and claims that are put forward by the proponents and opponents of legalised torture.

This book examines the ticking bomb hypothetical and explains how the component parts of the hypothetical are expansively interpreted in theory and practice. It also considers the effectiveness of torture in producing ‘ticking bomb’ and ‘infrastructure’ intelligence and examines the use of interrogational torture and coercion by state officials in Northern Ireland, Algeria, Israel, and as part of the CIA’s ‘High Value Detainee’ interrogation programme. As part of an empirical slippery slope argument, this book examines the difficulties in drafting the text of a torture statute; the difficulties of controlling the use of interrogational torture and problems such a law could create for state officials and wider society. Finally, it critically evaluates suggestions that debating the legalisation of torture is dangerous and should be avoided.

The book will be of interest to students and academics of criminology, law, sociology and philosophy, as well as the general reader.

Introduction  1. Torture, Consequences and the Perils of Legalisation  2. The Ticking Bomb Argument: Critical Perspectives  3. Interrogational Torture and the Question of Effectiveness  4. Torture Statutes, Slippery Slopes and the Challenges of Regulation  5. Debating Torture and the Benefits of Dissent  Conclusion.

Phillip NS Rumney is professor of criminal justice at Bristol Law School, UWE. He has written a number of articles on the debate over the legalisation of interrogational torture, including a detailed analysis of the effectiveness (or otherwise) of torture as a means of producing accurate and timely intelligence disclosures. He has also authored work that examines the way in which interrogational torture can serve to undermine counter-terrorism strategies by provoking retaliation or hardening the resolve of terrorist groups and their supporters.

Amongst his various research interests Phil engages in research concerning rape and freedom of expression. This work has been cited in various government reports, reviews and Parliamentary debates. He is actively engaged in several empirical and developmental projects concerning sexual violence, including a school-based sexual violence myth busting project; a domestic and sexual violence bystander intervention project; an evaluation of a specialist police rape investigation unit and a study of attitudes towards people charged with serious criminal offences. Outside of work, Phil is a passionate fan of boxing.

‘It is an unfortunate truth that the issue of torture continues to be a matter of debate, particularly in regard to "wars on terror" and, therefore, terrorists. The strength of Professor Rumney’s valuable book lies not only in the insight of a sharp critical intelligence, but also in his skill at presenting and assessing such empirical information that is relevant to considering the claims about the actual consequences of resorting to torture as a matter of public policy. It would make a wonderful assignment in any course on the subject, though it should also be read and discussed by policymakers as well who may be tempted to believe that "torture works."’ - Sanford Levinson, W. St. John Garwood and W. St. John Garwood, Jr. Centennial Chair and Professor of Government, The University of Texas at Austin, USA

‘There is a general consensus in the public debate that the state should never use torture as a means of interrogating terrorists and that the use of torture as a tool of interrogation is so clearly contrary to democratic values that even the discussion of his topic has become virtually taboo. Phil Rumney, in this courageous and path-breaking study, challenges the view that the issues surrounding the use of torture have been finally settled and cannot be discussed. Instead, he makes a compelling case that without confronting the moral dilemmas presented by the use of torture in the face of the threats posed by international terrorism the absolute prohibition of the use of torture may not be sustainable. This book makes an invaluable and original contribution to a controversial, but important public debate.’ - Christoph Bluth, Professor of International Relations and Security, University of Bradford, UK

'Rumney (Bristol Law School, UK) has provided a timely, detailed account of the use of torture during interrogations and whether it should be legalized.  His argument against legalization comes from recognition of human rights as well as ethical arguments... Politicians, as well as the public, whether they support legalization of torture or not, should read this concise and scholarly tome on an increasingly debated issue. Summing up: Highly Recommended'— W. R. Pruitt, Elmira College, CHOICE Reviews

'The book is suitable for both lawyers and non-lawyers, an informative and enjoyable read for anyone interested in the increasingly prominent torture debate. Rumney presents his arguments in a clear, easy-to-read fashion yet he does not fall into the trap of becoming too simplistic. He offers the reader compelling, well-reasoned arguments and supports them with a wealth of real-life examples. Torturing Terrorists is a book that simply cannot be put down!'— Donáta Szabó, International Human Rights Law Review