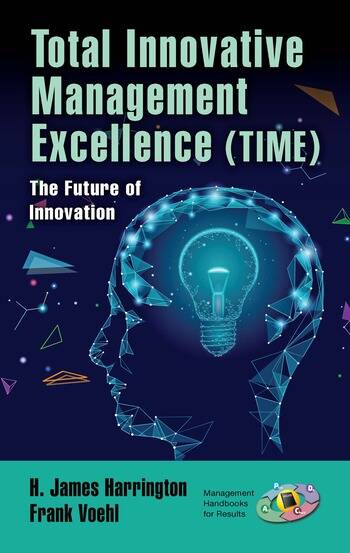 Dr. H. James Harrington and Frank Voehl have gathered together the thoughts and ideas of more than 20 of the most creative innovation thought leaders from business, professional practice, and academia in this compelling book. The thought leaders look at innovation from almost every angle – their statements offer an unparalleled view of innovation and provide a depth of insight that is extraordinary.

Harrington and Voehl’s reflection on each chapter, and on the sections within the book, provides useful links between themes and reinforces the relationships between many of the ideas. Anyone interested in innovation (practitioner or researcher) will benefit from this global thought collection.

The contributors' multiple perspectives, models, practical examples, and stories provide a sense of innovation that no single writer could ever capture. A company’s future growth will only come through successful innovation.

This book is organized around Dr. Harrington's innovation pyramid, which consists of the 16 building blocks required to bring about significant improvements in an organization’s ability to deliver creative products. It highlights the principles and recommendations in ISO's new innovation standard 56002 and provides many new concepts that are not included in the standard. It includes a free, powerful, and valuable online customized innovation maturity analysis.

Following three unassailable facts will strike you as soon as you read this book:

1. Innovation is the new mantra; whether you're involved in a not-for-profit, for-profit, service sector, or governmental organization.

2. Understanding that innovation and creative activities penetrate into every part of an organization requiring multiple perspectives that drive a new way of thinking and working that impacts the organization's culture, social operations, and commercial context that impacts the total organization, and not just new products or services.

3. Innovation is an exciting adventure. Total Innovative Management Excellence (TIME): The Future of Innovation (978-0-367-43242-3, 340635) draws on insights from around the globe in order to be competitive in fast-moving technologies.

BB1 Value-Added to Stakeholders: The Foundation

In the book, Tech Trending, Dr. Harrington was referred to as "the quintessential tech trender." The New York Times referred to him as having a "…knack for synthesis and an open mind about packaging his knowledge and experience in new ways – characteristics that may matter more as prerequisites for new-economy success than technical wizardry….". The author, Tom Peters, stated, "I fervently hope that Harrington’s readers will not only benefit from the thoroughness of his effort but will also ‘smell’ the fundamental nature of the challenge for change that he mounts." William Clinton, Past President of the U.S., appointed Dr. Harrington to serve as an Ambassador of Good Will. It has been said about him, "He writes the books that other consultants use."

Dr. Harrington is past Chairman and past President of the prestigious International Academy for Quality and of the American Society for Quality Control. He is also an active member of the Global Knowledge Economics Council.

Dr. H James Harrington was given a lifetime achievement award for his work in process improvement and in innovation by the International Association of Innovation Professionals.

H. James Harrington was elected to the honorary level of the International Academy for Quality, which is the highest level of recognition in the quality profession.

H. James Harrington is a government-registered Quality Engineer, a Certified Quality and Reliability Engineer by the American Society for Quality Control, and a Permanent Certified Professional Manager by the Institute of Certified Professional Managers. He is a certified Master Six Sigma Black Belt and received the title of Six Sigma Grand Master. H. James Harrington has an MBA and Ph.D. in Engineering Management and a BS in Electrical Engineering. Additionally, in 2013 Harrington received an Honorary Degree of Doctor of Philosophy (Ph.D,) from the Sudan Academy of Sciences.

H. James Harrington’s contributions to performance improvement around the world have brought him many honors. He was appointed the honorary advisor to the China Quality Control Association, and was elected to the Singapore Productivity Hall of Fame in 1990. He has been named lifetime honorary President of the Asia-Pacific Quality Control Organization and honorary Director of the Association Chilean de Control de Calidad. In 2006 Dr. Harrington accepted the Honorary Chairman position of Quality Technology Park of Iran.

H. James Harrington has been elected a Fellow of the British Quality Control Organization and the American Society for Quality Control. In 2008 he was elected to be an Honorary Fellow of the Iran Quality Association and Azerbaijan Quality Association. He was also elected an honorary member of the quality societies in Taiwan, Argentina, Brazil, Colombia, and Singapore. He is also listed in the "Who’s-Who Worldwide" and "Men of Distinction Worldwide." He has presented hundreds of papers on performance improvement and organizational management structure at the local, state, national, and international levels.

H. James Harrington has received many awards, among them the Benjamin L. Lubelsky Award, the John Delbert Award, the Administrative Applications Division Silver Anniversary Award, and the Inspection Division Gold Medal Award. In 1996, he received the ASQC’s Lancaster Award in recognition of his international activities. In 2001 he received the Magnolia Award in recognition for the many contributions he has made in improving quality in China. In 2002 H. James Harrington was selected by the European Literati Club to receive a lifetime achievement award at the Literati Award for Excellence ceremony in London. The award was given to honor his excellent literature contributions to the advancement of quality and organizational performance. Also, in 2002 H. James Harrington was awarded the International Academy of Quality President’s Award in recognition for outstanding global leadership in quality and competitiveness, and contributions to IAQ as Nominations Committee Chair, Vice President, and Chairman. In 2003 H. James Harrington received the Edwards Medal from the American Society for Quality (ASQ). The Edwards Medal is presented to the individual who has demonstrated the most outstanding leadership in the application of modern quality control methods, especially through the organization and administration of such work. In 2004 he received the Distinguished Service Award which is ASQ’s highest award for service granted by the Society. In 2008 Dr. Harrington was awarded the Sheikh Khalifa Excellence Award (UAE) in recognition of his superior performance as an original Quality and Excellence Guru who helped shape modern quality thinking. In 2009 Harrington was selected as the Professional of the Year (2009). Also in 2009 he received the Hamdan Bin Mohammed e-University Medal. In 2010 the Asian Pacific Quality Association (APQO) awarded Harrington the APQO President’s Award for his "exemplary leadership." The Australian Organization of Quality NSW’s Board recognized Harrington as "the Global Leader in Performance Improvement Initiatives" in 2010. In 2011 he was honored to receive the Shanghai Magnolia Special Contributions Award from the Shanghai Association for Quality in recognition of his 25 years of contributing to the advancement of quality in China. This was the first time that this award was given out. In 2012 Harrington received the ASQ Ishikawa Medal for his many contributions in promoting the understanding of process improvement and employee involvement on the human aspects of quality at the local, national, and international levels. Also in 2012 he was awarded the Jack Grayson Award. This award recognizes individuals who have demonstrated outstanding leadership in the application of quality philosophy, methods and tools in education, healthcare, public service and not-for-profit organizations. Harrington also received the A.C. Rosander Award in 2012. This is ASQ Service Quality Division’s highest honor. It is given in recognition of outstanding long-term service and leadership resulting in substantial progress toward the fulfillment of the Division’s programs and goals. Additionally, in 2012 Harrington was honored by the Asia Pacific Quality Organization by being awarded the Armand V. Feigenbaum Lifetime Achievement Medal. This award is given annually to an individual whose relentless pursuit of performance improvement over a minimum of 25 years has distinguished himself or herself for the candidate’s work in promoting the use of quality methodologies and principles within and outside of the organization he or she is part of. In 2018 Harrington received the Lifetime Achievement Award from the Asia Pacific Quality Organization. This award recognizes worthy role models and committed APQO Leaders who have made significant contribution to the betterment of APQO.

Dr. Harrington is a very prolific author, publishing hundreds of technical reports and magazine articles. For the past 8 years he has published a monthly column in Quality Digest Magazine and is syndicated in five other publications. He has authored 55 books and 10 software packages.

Frank Voehl now serves as the Chairman and President of Strategy Associates, Inc. and as a Senior Consultant and Chancellor for the Harrington Management Systems. He also serves as the Chairman of the Board for a number of businesses and as a Grand Master Black Belt Instructor and Technology Advisor at the University of Central Florida in Orlando, Florida. He is recognized as one of the world leaders in applying quality measurement and Lean Six Sigma methodologies to business processes.

Frank Voehl has extensive knowledge of NRC, FDA, GMP & NASA quality system requirements. He is an expert in ISO-9000, QS-9000/14000/18000 and integrated Lean Six Sigma Quality System Standards and processes. He has degrees from St. John’s University and advanced studies at NYU, as well as an Honorary Doctor of Divinity degree. Since 1986, he has been responsible for overseeing the implementation of Quality Management systems with organizations in such diverse industries as telecommunications and utilities, federal, state and local government agencies, public administration and safety, pharmaceuticals, insurance/banking, manufacturing, and institutes of higher learning. In 2002, he joined The Harrington Group as the Chief Operating Officer and Executive Vice-President. Has held executive management positions with Florida Power and Light and FPL Group, where he was the Founding General Manager and COO of QualTec Quality Services for seven years. He has written and published/co-published over 35 books and hundreds of technical papers on business management, quality improvement, change management, knowledge management, logistics and teambuilding, and has received numerous awards for community leadership, service to the third world countries, and student mentoring.

The Bahamas National Quality Award was developed in 1991 by Voehl to recognize the many contributions of companies in the Caribbean region, and he is an honorary member of its Board of Judges. In 1980, the City of Yonkers, NY, declared March 7th as ‘Frank Voehl Day,’ honoring him for his many contributions on behalf of thousands of youth in the city where he lived, performed volunteer work, and served as Athletic Director and Coach of the Yonkers-Pelton Basketball Association. In 1985 he was named ‘Father of the Year’ in Broward County, FL.  He also serves as President of the Miami Archdiocesan Council of the St. Vincent de Paul Society, whose mission is to serve the poor and needy throughout South Florida and the world.