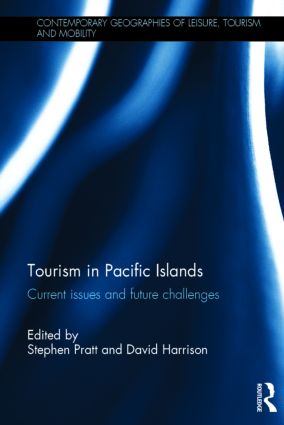 Pacific Island Countries have been shown to be especially vulnerable to such external influences as natural disasters, political unrest and downturns in the global economy and their tourism industries have been notably affected. In particular, they typically have a narrow resource base and a fragile and often vulnerable natural environment. While there is some research on islands and small states, there is a dearth of information on the South Pacific and very little research is being undertaken in the region compared to other geographical regions in the world. This volume brings together current work in Pacific Island tourism.

In this collection, three main themes arise: Images of the South Pacific; Socio-economic Impacts of Tourism; and Pacific Island Countries and the Outside World. The first focus is on the question of image, namely, stereotypes of a destination held by tourists and potential tourists, the extent to which residents, for their part, really welcome visitors, and the role tourism might play in changing pre-established images. The second theme is tourism's impacts, notably the economic and socio-cultural effects of international tourism's intrusion in the region which, though often hotly debated, have attracted relatively little empirical research. The third focus is on the challenges of how PICs articulate with their external geo-political and physical environment. These involve existing relations with formal colonial centres, geographical isolation, the need for greater air access to the outside world and for more tourists, and the continuing threat to several PICs of global warming, which increased air travel will inevitably exacerbate.

This text will be of interest to tourism students, researchers and academics in the fields of tourism, development studies and cultural studies.

Stephen Pratt is Assistant Professor at the School of Hospitality and Tourism Management, Hong Kong Polytechnic University, Hong Kong. His main research interests lie in the areas of economic impacts of tourism, tourism marketing, sustainable tourism and tourism in the South Pacific.

David Harrison was from 2008 until early 2014 Professor and Head of the School of Tourism and Hospitality Management, University of the South Pacific, Fiji. He is now Professor of Tourism at Middlesex University, London. His primary interests are the economic, social and cultural aspects of tourism in developing countries, and he has carried out research and written on tourism in the Eastern Caribbean, Southern Africa, Eastern Europe, South-East Asia and the South Pacific.

The aim of this series is to explore and communicate the intersections and relationships between leisure, tourism and human mobility within the social sciences.
It will incorporate both traditional and new perspectives on leisure and tourism from contemporary geography whilst also providing for perspectives from cognate areas within the development of an integrated field of leisure and tourism studies.
Also, increasingly, tourism and leisure are regarded as steps in a continuum of human mobility. Inclusion of mobility in the series offers the prospect to examine the relationship between tourism and migration, the sojourner, educational travel, and second home and retirement travel phenomena.