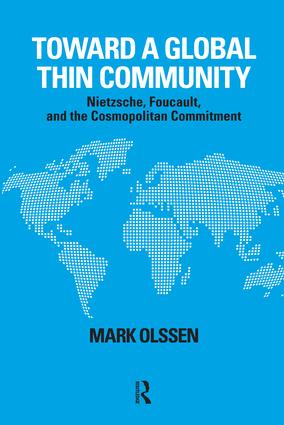 Toward a Global Thin Community

"Toward a Global 'Thin' Community re-examines aspects of the liberal-communitarian debate. While critical of both traditions, this book argues that a coherent form of communitarianism is the only plausible option for citizens today. Using the theories of Friedrich Nietzsche and Michel Foucault, Olssen shows how we can overcome traditional problems with communitarianism by using an ethic of survival that he identifies in the writings of Nietzsche and others to provide a normative framework for twenty-first century politics at both national and global levels. "Thin" communitarianism seeks to surmount traditional objections associated with Hegel and Marx, and to safeguard liberty and difference by applying a robust idea of democracy."

"Mark Olssen has written an ambitious book that grapples with both theoretical subtleties and the complexities of our contemporary situation. His proposed 'thin communitarianism' recognizes our social constitution while avoiding the totalitarian temptations that often haunt communitarian thought. The scope and sensitivity of this work constitute a real contribution to thinking about the politics of our time.

"Olssen's book breathes new life into the debates around liberalism and politics. His grasp of diverse philosophical traditions is stunning. This is an extremely erudite but eminently practical exercise which articulates an original but very topical 'third position' in political philosophy. Sociologists, political scientists and philosophers will all find themselves fascinated and challenged by Olssen's arguments."

"In this wide-ranging and well-argued book, Mark Olssen skilfully exposes the limitations of liberalism and communitarianism, and offers a richer view of the human self. He uses it to advance a philosophically sophisticated and politically realistic global ethics that is sensitive both to human solidarity and national differences. A rich book. Warmly to be welcomed."

"Mark Olssen's Toward a Global Thin Community is an intellectually energizing and beautifully written book. Refusing to accept either an individualism without limits or a notion of freedom removed from wider social responsibilities, he provides a vigorous defense of the common good, democracy, and public life. Not only does he offer the reader a useful understanding of the varied discourses of liberalism and communitarianism, he also draws upon a number of philosophical traditions to give us a brilliant and original theory of democracy. Olssen has produced a book of great insight, conviction, and hope for those of us concerned about the fate of democracy in the new millennium."-Henry Giroux, Global Television Network Chair Professor Communication and English Faculty of Humanities, McMaster University

"Mark Olssen's book is well researched and erudite…[he] deals with theoretical or philosophical issues and problems of contemporary politics equally well. Not only does he show the relevance of Nietzsche and Foucault today, but he also demonstrates the importance of political theory and philosophy for grappling with the complexities of the global politics of our time. Overall, this is in important, challenging and rewarding book."-Evangelia Sembou, Foucault Studies, No. 13, pp 201-204, May 2012

2. Understanding the New Nietzsche; 3. Michel Foucault as "Thin" Communitarian; 4. Building Democratic Citizenship: Globalization and the "Third Way"; 5. Frederic von Hayek and Global Governance: On State Sovereignty and Legitimacy; 6. Totalitarianism and the Repressed Utopia of the Present; 7. Multiculturalism, Diversity, and Equality; 8. Education and the Issue of Autonomy; 9. Invoking Democracy: Foucault's Conception; 10. Conclusion: Education and Justice in a Global World.