Toward a Radical Therapy
Alternate Services for Personal and Social Change 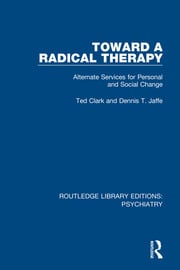 Toward a Radical Therapy: Alternate Services for Personal and Social Change

In September 1969, Ted Clark, Dennis Jaffe, and Yvonne Durchfort (now Yvonne Jaffe) started "Number Nine", a crisis telephone line. Initially this was an attempt to discover from young people themselves exactly what the needs of young people were, in order that a program relevant to those needs might be developed. The crisis line program, in itself, proved useful and meaningful to young people as they began calling in increasing numbers. Since many community agencies – through their insistence that young people cooperate with a value system that does not engender trust – alienated themselves from these young people, it became increasingly imperative that the crisis line expand its resources to include counseling, a crash pad, a residential program, and a drop-in center. As an alternative to those agencies who insist on viewing drug use as a problem per se and who do not focus their attentions on family, school, and personal relationships in general, "Number Nine" offered realistic and reachable solutions.

Originally published in 1973, Toward a Radical Therapy is a collection of essays concerning numerous issues which the authors encountered during the development of an alternative service – an organization which reflects the values and experiences of young people (the counter-culture), rather than the values of the established social order, as a necessary step toward helping people cope with their problems. The ideas expounded in these working papers are the outcome of experiences and experiments in attempting to effect personal and organizational changes basic to creating an alternative culture.

Concurrent with the writing of this book, the authors discovered numerous conflicts occurring at all levels of program and institutional development, as well as within themselves. Personal changes become necessarily interrelated with social change and organizational structuring. Counseling had to be redefined as existing theories and methodologies were limited in their ability to comprehend the constant changes that youth were undergoing at the time.

Introduction.  1. The Destruction of Youth  2. Deviance and Delinquency as Frustrated Rebellion  3. The Counter-Culture as a Process of Social Change  4. The Repression and Support of Psychedelic Experience  5. Number Nine: Crisis and Growth Center for Youth  6. The Structure and Function of Alternate Services  7. Radical Counseling Programs  8. Three Experimental Therapeutic Communities  9. The "Foreign Policy" of Number Nine.  Bibliography.