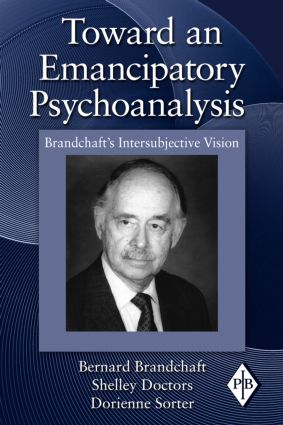 Toward an Emancipatory Psychoanalysis

Best known for his contributions to the development of contemporary intersubjectivity theory, Bernard Brandchaft has dedicated a career to the advancement of psychoanalytic theory and practice. Continually searching for a theoretical viewpoint that would satisfactorily explain the clinical phenomena he was encountering, his curiosity eventually led him to the work of Heinz Kohut and the then-emerging school of self psychology. However, seemingly always one step ahead of the crowd, Brandchaft constantly reformulated his ideas about and investigations into the intersubjective nature of human experiences.

Many of the chapters in this volume have never before been published. Together, they articulate the evolution of Brandchaft's thinking along the road toward an emancipatory psychoanalysis. Moreover, commentary from Shelley Doctors and Dorienne Sorter – in addition to Bernard Brandchaft himself – examines the clinical implications of the theoretical shifts that he advocated and provides a contemporary context for the case material and conclusions each paper presents. These theoretical shifts, both clear and subtle, are thereby elucidated to form the grand narrative of a truly visionary psychoanalytic thinker.

"For nearly three decades, Bernard Brandchaft has been developing an emancipatory vision in psychoanalysis, evocatively captured in the titles of two earlier chapters reappearing in this volume: 'Bonds That Shackle, Ties That Free' (1987) and 'To Free a Spirit from Its Cell' (1994). This vision reaches a stunning culmination in Toward an Emancipatory Psychoanalysis. Brandchaft finds the shackles that chain us and the cells that imprison us in what he calls systems of pathological accommodation - relational contexts in which one unconsciously sacrifices one's own perceptual-emotional reality and adopts that which is required by an other in order to maintain a needed tie. He deftly illuminates the pervasiveness of such accommodative patterns in a wide range of clinical phenomena and problems, and shows us how these patterns must be carefully investigated in order to facilitate therapeutic change. And in an elegant metalogue, he lays bare the extent to which the evolution of psychoanalysis itself has been stunted by accommodation to authority. In this book, Brandchaft, Doctors, and Sorter gather and synthesize the life's work of a master clinician and clinical theorist, and I wholeheartedly recommend it to anyone seeking to expand the domain of human freedom and emotional authenticity." - Robert D. Stolorow, Ph.D., author, Trauma and Human Existence (Routledge, 2007)

"This is a most important book and, in its own way, a triumph. It describes the fruits of a highly creative career trajectory which has traversed in turn the main theories underpinning psychoanalytic practice to emerge with a new view of fundamental therapeutic significance, based on what Brandchaft sees as the primary datum, the 'livid interactive experience of the patient.' His conceptualization of 'systems of pathological accommodation' is an innovation of major importance, offering a paradigm shift in the way traumatic phenomena are to be understood. This book concerns the work of an original and compassionate thinker. It is a 'must read' for those involved in work with the more severely damaged patient." - Russell Meares, M.D., Emeritus Professor, University of Sydney

"Bernard Brandchaft defines 'emancipatory' as 'the analyst's capacity to liberate his own vision of what is true or best for his patient.' This fascinating volume recounts his personal and intellectual odyssey in an attempt to achieve that emancipation. Trained in traditional drive and ego psychology, attracted first to British object relations and Kleinian theory, then to Kohut and self psychology, and finally to Stolorow, Atwood and intersubjectivity, he views his personal journey as in many ways parallel to the evolution of the profession of psychoanalysis, struggling to liberate itself from the stifling 'one-person' psychology inherited from Freud. Brandchaft discusses a developmental model that emphasizes the role of 'systems of pathological accommodation.' His case histories, with which the book is richly supplied, explore these systems in the lives of his patients and illustrate them in his descriptions of clinical process. His interest in intersubjectivity is reflected not only in his clinical work, but also in his intellectual biography. He emphasizes his close personal relationships with individual British Kleinians, self psychologists, Stolorow and Atwood, and finally with Shelley Doctors and Dorienne Sorter, students and colleagues who collaborated with him in this volume. Readers are privileged to join the three of them in a dialogue about the development and application of Brandchaft's intersubjective vision." - Robert Michels, M.D., Joint Editor-in-Chief, International Journal of Psychoanalysis

"A paradigm change lies within this book. Read it in depth and you will realize that Brandchaft is trying to emancipate psychoanalysis from its entrenched notions about why we humans are so prone to repeat our most painful, self-defeating patterns. Shelley Doctors and Dorienne Sorter beautifully capture how Brandchaft's highly disciplined clinical approach is essential to the liberating aspects of his thinking. Read Brandchaft with them and you may emancipate your own thinking and clinical practice." - Malcolm Owen Slavin, Ph.D., Massachusetts Institute for Psychoanalysis

"This outstanding book illuminates the crucial contribution of Bernard Brandchaft to contemporary psychoanalysis. As you read this book you will be fascinated by crucial theoretical issues, such as systems of pathological accommodation, the traumatic relatedness in the development of the human mind, a reconsideration of the intersubjective field (to mention just a few), as well as by the many clinical cases that exemplify them. Brandchaft, Doctors, and Sorter have truly accomplished an incredible work: Every analyst and therapist interested in a contemporary clinical approach will find in this book an indispensible companion both in answering many questions and formulating new, challenging perspectives." - Gianni Nebbiosi, Ph.D., President and Co-founder, ISIPSé

Bernard Brandchaft, M.D., is a Training and Supervising Analyst at the Los Angeles Psychoanalytic Institute and Founding Analyst of the Institute for the Psychoanalytic Study of Subjectivity, as well as Faculty Emeritus of Clinical Psychiatry, UCLA School of Medicine. He is the author of numerous articles and books, co-authoring (with George Atwood and Robert Stolorow) Psychoanalytic Treatment: An Intersubjective Approach (Analytic Press, 1987) and The Intersubjective Perspective (Jason Aronson, 1994).

Dorienne Sorter, Ph.D., LCSW, is Faculty and Supervising Analyst at the Institute for Psychoanalytic Study of Subjectivity, New York City, and a member of the Council of the International Association of Psychoanalytic Self Psychology. She is the co-author of Forms of Intersubjectivity in Infant Research and Adult Treatment (Other Press, 2005).

Like its counterpart, Psychoanalytic Inquiry: A Topical Journal for Mental Health Professionals, the Psychoanalytic Inquiry Book Series presents a diversity of subjects within a diversity of approaches to those subjects. Under the editorship of Joseph Lichtenberg, in collaboration with Melvin Bornstein and the editorial board of Psychoanalytic Inquiry, the volumes in this series strike a balance between research, theory, and clinical application. We are honored to have published the works of various innovators in psychoanalysis, such as Lachmann, Fosshage, Stolorow, Orange, Sander, Wurmser, Grotstein, Jones, Brothers, Busch, and Lichtenberg, among others.

The series includes books and monographs on mainline psychoanalytic topics, such as sexuality, narcissism, trauma, homosexuality, jealousy, envy, and varied aspects of analytic process and technique.  In our efforts to broaden the field of analytic interest, the series has incorporated and embraced innovative discoveries in infant research, self psychology, intersubjectivity, motivational systems, affects as process, responses to cancer, borderline states, contextualism, postmodernism, attachment research and theory, medication, and mentalization. As further investigations in psychoanalysis come to fruition, we seek to present them in readable, easily comprehensible writing.

After 25 years, the core vision of this series remains the investigation, analysis and discussion of developments on the cutting edge of the psychoanalytic field, inspired by a boundless spirit of inquiry.