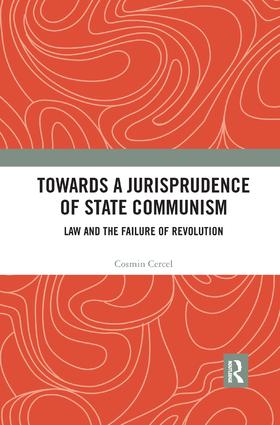 Towards A Jurisprudence of State Communism

Law and the Failure of Revolution, 1st Edition

More than twenty-five years after the collapse of the Socialist bloc, the nature of the regimes in Eastern Europe between 1945 and 1989 continues to evade the attempts of political theorists and scholars of post-communism to define and classify them. Drawing on philosophical inquiry, jurisprudential analysis and intellectual history, this book traces the impact of communist ideology and practice on legal thought: from its critical roots in the midst of the nineteenth century to its reactionary stand in the later years of the twentieth. Exploring how the communist experience – both in its revolutionary and authoritarian guises – has been articulated within the legal theoretical field, the book addresses two central theoretical lacunae fostered by the historiography of authoritarianism in Central and Eastern Europe: the status of law, and its relationship to the broader ideological framework legitimising authoritarian regimes. Moving beyond the limits of the contemporary discourse on communism – particularly as it is channelled through transitional justice and memory studies – Cosmin Cercel develops a theoretical framework that is able to uncover law’s complicity with the extreme ideologies that dominated Central and Eastern Europe. For it is, he argues, in its recourse to legal concepts that the communist experience raises important jurisprudential questions for our contemporary understanding of law, the limits of state sovereignty, and law’s relationship to historical violence.

Law Before Communism: Modernity and the Authoritarian Drive

Chapter 2 A Criticism of the Heaven: Class Struggle and the Law in Theory and Practice

Chapter 5 The Discourse of the Master: War, Law and the Communist Takeover

Law as State-Truth: the Law-Preserving Violence and the Limits of Communism

Chapter 7 Exit Communism: Legal Amnesia and the Return of the Repressed