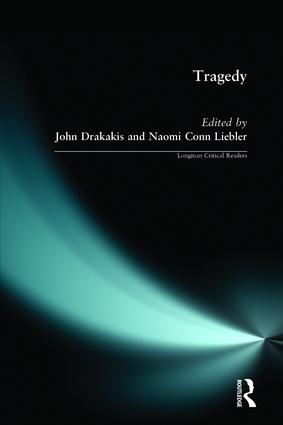 This wide-ranging and unique collection of documents on one of the most enduring of literary genres, Tragedy, offers a radical revaluation of its significance in the light of the critical attention that it has received during the past one-hundred and fifty years. The foundations of much contemporary thinking about Tragedy are to be found in the writings of Hegel, Nietzsche, and Kierkegaard; in addition, the dialectical tradition emanating from Marxism, and the psycho-analytical writings of Freud, have extended significantly the horizons of the subject.

With the explosion of interest in the areas of post-structuralism, sociology of culture, social anthropology, feminism, deconstruction, and the study of ritual, new questions are being asked about this persistent artistic exploration of human experience. This book seeks to represent a full selection of these divergent interests, in a series of substantial extracts which display the continuing richness of the debate about a genre which has provoked, and challenged categorical discussion since the appearance of Aristotle's Poetics.

General Editor's Preface Acknowledgements 1. Introduction 2. The Philosophy of Tragedy G.W.F. Hegel, Tragedy as a dramatic art; A. C. Bradley, Hegel's Theory of Tragedy; Friedrich Nietzsche from The Birth of Tragedy; Soren Kierkegaard, The Tragic in Ancient Drama; Georg Lukacs, The Metaphysics of Tragedy 3. Historical Materialism and Tragedy Lucien Goldman, The Tragic Vision: Man; World Visions and Social Classes; Bertold Breght from A Short Organum for the Theatre; George Thomson, Tragedy; Walter Benjamin, Trauerspiel and Tragedy; Alain Robbe-Grillet, Nature, Humanism and Tragedy; Augusto Boal, Aristotle's Coercive System of Tragedy 4. Tradition and Innovation Arthur Miller, Tragedy and the Common Man ; Arthur Miller, The Nature of Tragedy; George Steiner from The Death of Tragedy; Raymond Williams from Modern Tragedy 5. Psychoanalysis and Tragedy Sigmund Freud from Character and Culture; Jacques Lacan, The Splendor of Antigone; Andre Greend, The Psychoanalytic Reading of Tragedy 6. Feminism and Tragedy Elisabeth Bronten from Omphalos to Phallus: Cultural Representations of Femininity and Death; Sarah B. Pomeroy, Images of Women in the Literature of Classical Athens; Nicole Loraux, The Rope and the Sword 7. Ritual and Tragedy Jan Kott, The Eating of the Gods, or the Bacchae; Rene Girard, The Sacrificial Crisis; Wole Soyinka, Morality and Aesthetics and the Ritual of Archetype; Northrop Frye, The Mythos of Autumn: Tragedy; Susanne K. Langer, The Great Dramatic Forms: The Tragic Rhythm 8. Deconstruction and Tragedy Jacques Derrida, Plato's Pharmacy Bibliography Index