Transaction and Hierarchy
Elements for a Theory of Caste 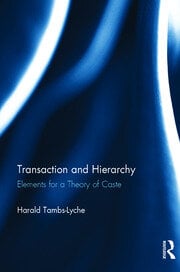 Transaction and Hierarchy: Elements for a Theory of Caste

In this volume, the author challenges a number of widely held cultural stereotypes about India. Caste is not as old as Indian civilization itself, and current changes are no more radical than in the past, for caste has evolved throughout its history. It is not a colonial invention, nor does it result from weak state control. There is no single form of Indian kingship, and power relations, fundamental as they are for understanding Indian society. Nor do Indian villages conform to a single type, and caste is as much urban as rural. Only in a regional ‘local’ perspective can we view it as a ‘system’. Caste does offer space for the individual, though in a particular Indian mould, and Hinduism does not provide for an integration of castes through ritual.

In short, social organization varies widely in India, and cannot provide the key to the specificity of caste. This must be sought in the way society is imagined, the models of society current in Indian thought. Of course as mentioned above, there is no single model: Brahmins, kings, and merchants among others have all produced alternative models with themselves at the centre, vying for hegemony, while facing contesting models held by subalterns. Still, a hierarchical mode of thought is hegemonic and largely explains why Indians see their social stratification differently from people in the West.

The volume will be indispensable for scholars of South Asian Sociology and Culture.

The Enigma of Caste, Three Objections, Theories of Caste to 1950, Early Sociology and G.S. Ghurye, Village Studies, Louis Dumont: An Integrated Theory of Caste, Alternative Approaches to Meaning: Marriott and the Chicago Indianists, Debating Caste: From the 1960s to the 1980s, From the 1980s to the Third Millennium, Where do we Stand Now?, Can we Still Talk of Different ‘Cultures’ ?, Is Anthropology a ‘Eurocentric’ Science?, My Own Voice

2. From History to the Individual

The Plan of the Book, Can we Construct a History of Caste?, Is there an Indian Brand of Individualism?, The ‘Modernist’ Individual, Individualist Discourses, Towards an Indian Conception of the Individual

3. From Individual to Community

Interaction in India and the West, On the Buses, In Train Compartments, Learning from Interaction, Inside, Outside and Among Communities, Caste, Family and the ‘We’, Conceptions of Family, ‘Inside’ and ‘Outside’, The Diversity of Castes as Forms of Community, Castes Traditionally Employed in Agriculture, Ex-untouchables in Farming and Other Occupations, Artisans and Other Specialist Castes, Brahmins and Priestly Castes, General Remarks

4. Estates, History and the Village

Alternative Perspectives on Caste Society: the Estates, Other Estates, Brahmins and Untouchables, Ways of Living Together: Historicity and Power in the Village, Power and History in Small Villages: Saurashtra and Rajasthan, Relative Autonomy: Hamlets in the Periphery
of Saurashtra

Integration and Hierarchy in a Large, Saurashtra Village: Praj, Feudal Fiefs and Mosaic Patterns in South Kanara, Descendants of Pioneers in the Bangladesh Sundarbans, Brahmadeya Villages of Tamil Nadu, Power and Violence, The Moneylender and the Peasant, Custom as Politics, Caste in Modern Politics: South Kanara, Politics of Caste in Gujarat

Regional Authority and the Role of the King, Forms of Kingship: Gujarat and Northern India, Kingship in South India, A Tentative Typology of Indian Kingship, Urban Life: Power and Community, Pre-colonial Towns of Tamil Nadu, Vijayanagar in the Sixteenth Century, Surat, the Port of the Mughals, Temple Towns or Ritual Centres, Udupi: From Temple Centre to the Modern Town, Power and Community in the Towns of Gujarat, Ahmedabad, Bombay: Metropolis with a Communitarian Structure, Calcutta and Other Metropolitan Centres, Caste and Urban Structure

8. A Discourse that Structures Hegemony

Harald Tambs-Lyche studied at the University of Bergen, Norway and at SOAS, London. Following work on the Indian diaspora (London Patidars, 1980) he worked extensively on religion and society in Saurashtra, Gujarat (Power, Profit and Poetry, 1997; The Good Country, 2004). Since the 1990s he has worked on the Gauda Saraswat Brahmins of South Kanara (Business Brahmins, 2011), and is currently working, with his wife Marine Carrin, on a monograph on that region.

Tambs-Lyche has co-authored, edited or co-edited several other books, and is the author of a large number of papers on Indian religion and society.

He retired as professor of Ethnology, University of Picardie at Amiens, France, in 2013.