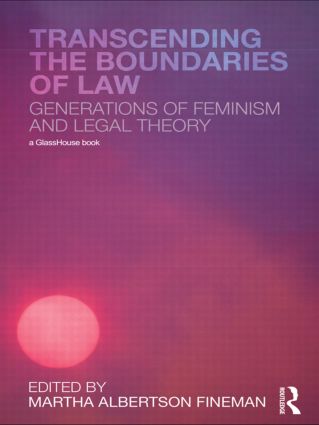 Transcending the Boundaries of Law

Transcending the Boundaries of Law is a ground-breaking collection that will be central to future developments in feminist and related critical theories about law. In its pages three generations of feminist legal theorists engage with what have become key feminist themes, including equality, embodiment, identity, intimacy, and law and politics. Almost two decades ago Routledge published the very first anthology in feminist legal theory, At the Boundaries of Law (M.A. Fineman and N. Thomadsen, eds. 1991), which marked an important conceptual move away from the study of "women in law" prevalent in the 1970s and 1980s. The scholars in At the Boundaries applied feminist methods and theories in examining law and legal institutions, thus expanding upon work in the Law and Society tradition. This new anthology brings together some of the original contributors to that volume with scholars from subsequent generations of critical gender theorists. It provides a "retrospective" on the past twenty-five years of scholarly engagement with issues relating to gender and law, as well as suggesting directions for future inquiry, including the tantalizing suggestion that feminist legal theory should move beyond gender as its primary focus to consider the theoretical, political, and social implications of the universally shared and constant vulnerability inherent in the human condition.

Martha Albertson Fineman is Robert W. Woodruff Professor of Law at Emory University and Director and Founder of the Feminism and Legal Theory Project.