Transform methods provide a bridge between the commonly used method of separation of variables and numerical techniques for solving linear partial differential equations. While in some ways similar to separation of variables, transform methods can be effective for a wider class of problems. Even when the inverse of the transform cannot be found analytically, numeric and asymptotic techniques now exist for their inversion, and because the problem retains some of its analytic aspect, one can gain greater physical insight than typically obtained from a purely numerical approach.

Transform Methods for Solving Partial Differential Equations, Second Edition illustrates the use of Laplace, Fourier, and Hankel transforms to solve partial differential equations encountered in science and engineering. The author has expanded the second edition to provide a broader perspective on the applicability and use of transform methods and incorporated a number of significant refinements:

New in the Second Edition:

·         Discussions throughout the book that compare and contrast transform methods with separation of variables, asymptotic methods, and numerical techniques

·         A revised format that makes the book easier to use as a reference: problems are classified according to type of region, type of coordinate system, and type of partial differential equation

·         Updated references, now arranged by subject instead of listed all together

As reflected by the book's organization, content, and many examples, the author's focus remains firmly on applications. While the subject matter is classical, this book gives it a fresh, modern treatment that is exceptionally practical, eminently readable, and especially valuable to anyone solving problems in engineering and the applied sciences.

“This book provides a detailed account of the application of transform methods to solving linear PDEs in science and engineering. The main techniques studied are the Fourier and Laplace transform, Hankel transforms, and the Wiener-Hopf technique. In this second edition the references have been extended and numerical and asymptotic techniques are included. It provides a valuable source of concrete examples from diverse fields of applications with detailed solutions.”
— M. Kunzinger

“The discussed solutions typically involve quite difficult algebra, while non-trivial mathematical steps, such as a change of order of integration or expansion into infinite series (product) are not justified. This gives the book more of an ‘engineering’ flavour; nonetheless it is certainly of interest to a wider interest.”
—EMS Newsletter, Sept. 2005

“The book contains many examples and exercises taken from a wide variety of scientific and engineering sources. Also numerical examples are presented using Matlab to help readers for better understanding of the physical problems.”
—Studia Univ. “Babes-Bolyai” Mathematica, Sept. 2005 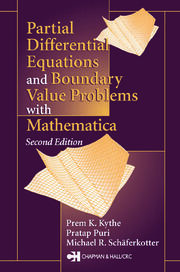