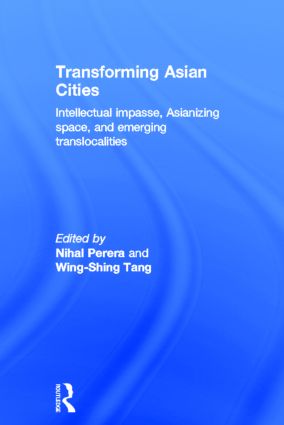 While there is no lack of studies on Asian cities, the majority focus on financial districts, poverty, the slum, tradition, tourism, and pollution, and use the modern, affluent, and transforming Western city as the reference point. This vast Asian empirical presence is not complemented by a theoretical presence; academic discourses overlook common and basic urban processes, particularly the production of space, place, and identity by ordinary citizens.

Switching the vantage point to Asian cities and citizens, Transforming Asian Cities draws attention to how Asians produce their contemporary urban practices, identities, and spaces as part of resisting, responding to, and avoiding larger global and national processes. Instead of viewing Asian cities in opposition to the Western city and using it as the norm, this book instead opts to provincialize mainstream and traditional knowledge. It argues that the vast terrain of ordinary actors and spaces which are currently left out should be reflected in academic debates and policy decisions, and the local thinking processes that constitute these spaces need to be acknowledged, enabled, and critiqued.

The individual chapters illustrate that "global" spaces are more (trans)local, traditional environments are more modern, and Asian spaces are better defined than acknowledged. The aim is to develop room for understandings of Asian cities from Asian standpoints, especially acknowledging how Asians observe, interpret, understand, and create space in their cities.

"Transforming Asian Cities… [a] recent and timely contribution to the literature on Asian cities that seek[s] to better understand the diversity, realities and challenges in Asian urbanism and transformation." - Zhu Qian, International Development Planning Review, 35 (3) 2013

Nihal Perera is Professor of Urban Planning at Ball State University, and Director of the CapAsia field study program. He was Fulbright Scholar in China (2006–2007) and Senior Research Fellow at the National University of Singapore (2010). His publications include Decolonizing Ceylon, “People's Spaces,” “Contesting Visions in Chandigarh,” and “Feminizing the City.”

Wing-Shing Tang is Professor of Geography at Hong Kong Baptist University, and a member of the Editorial Board of Urban Geography and Corresponding Editor of the International Journal of Urban and Regional Research. His research focuses on interrogating Lefebvre, Foucault, Gramsci, and Harvey with the local spatio-history to construct an interdependent understanding of urban (re)development and planning in Hong Kong and China.