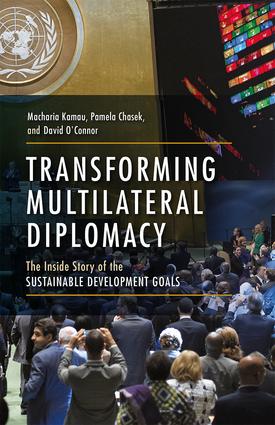 The Inside Story of the Sustainable Development Goals, 1st Edition

Transforming Multilateral Diplomacy provides the inside view of the negotiations that produced the UN Sustainable Development Goals (SDGs). Not only did this process mark a sea change in how the UN conducts multilateral diplomacy, it changed the way the UN does its business. This book tells the story of the people, issues, negotiations, and paradigm shifts that unfolded through the Open Working Group (OWG) on SDGs and the subsequent negotiations on the 2030 Sustainable Development Agenda, from the unique point of view of Ambassador Macharia Kamau, and other key participants from governments, the UN Secretariat, and civil society.

“The adoption of the Sustainable Development Goals in 2015 was a defining moment in United Nations history and no one is better placed than Ambassador Macharia Kamau to tell the story of how we achieved this transformative vision for a better world.” —Ban Ki-moon, Eighth Secretary-General of the United Nations

“An inside look at the drama of the negotiations, and the creation of a new UN development paradigm.” —Shannon Orr, Bowling Green State University

What Are the Sustainable Development Goals?

Time for a Change

A Quick Guide to UN Negotiations

The Need for a Paradigm Shift

The Tipping Point: Rio+20 and the Birth of the SDGs

Back to New York: Rio+20 Follow-up

Playing the Long Game to Educate, Depoliticize and Level the Playing Field

The Elephants in the Room

5 THE CAST OF CHARACTERS

6 THE USE OF PROCESS AND DRAMA

A Bird’s Eye View of the SDG Negotiations

7 THE BIRTH OF THE GOALS

Goals 1–6: Updating and Enhancing the MDGs

Employment and Equality for the New Agenda

8 PULLING IT ALL TOGETHER: THE SDGS AND THE POST-2015 DEVELOPMENT AGENDA

The Politics of a Declaration

Means of Implementation and the Global Partnership: Almost a Disaster

Follow-up and Review: Another Elephant in the Room

Macharia Kamau, as Ambassador and Permanent Representative of Kenya to the UN, served as Co-Chair of the OWG on the SDGs and the Co-Facilitator of the Intergovernmental Negotiations on the 2030 Sustainable Development Agenda. In 2014 he was awarded the Gold Medal Award for Environmental Diplomacy from the International Council of Environmental Law and the International Union for Conservation of Nature.

David O’Connor served, from 2003 to 2015, as Chief of the Policy and Analysis Branch, Division for Sustainable Development, Department of Economic and Social Affairs, UN where he led a team of policy researchers who provided the analytical direction and substanceto the UN’s work on sustainable development, supporting the Open Working Group on the Sustainable Development Goals.