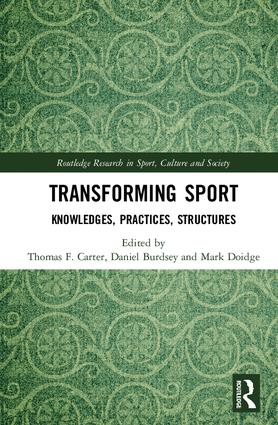 Sport sociology has a responsibility to engage critically with the accepted wisdom of those who govern and promote sport. This challenging collection of international research is a clear call for enacting the transformation of sport. The contributing authors argue that it is not enough to merely advocate for change. Rather, they insist that scholars need to take an active political stance when conducting research with the explicit purpose of attempting to transform the practices, structures, and the ways in which knowledge is produced about sport.

By exposing and challenging the power relations which perpetuate discrimination and inequality within sport, it becomes possible to catalyse wider societal changes. Drawing on a diversity of topics including sport for development and peace, transnational feminism, disability sport, refugees and football activism, FIFA, the Olympics, sports journalism and digital sports media, this book makes a case for sport sociology as an agent of positive change in the hierarchies and institutional structures of contemporary sport.

provides valuable insights for all students and scholars interested in the sociology of sport and its transformative potential.

1. ‘Something has got to be done about this’: Transforming Sport, Selves and Scholarship

2. Refugees United: The Role of Activism and Football in Supporting Refugees

3. Agency and Intention Without Individualism: Some Methodological Pre-requisites?

4. Coming Out of Containment: Feminist Methodological Considerations for Researching Women in Sport

5. "The Point, However, Is to Change It": Critical Social Sciences and the Olympic Games

6. Transforming Methodological Nationalism: The Case of Sports Scholarship and Policy Towards Migrants and Descendants

10. Exploring the Growth of the Commonwealth Games

13. Putting the P in SDP: Sport and Peace-Building in Divided Societies: The Origins and Evolution of Critical Proactivism

15. Sports Journalism and Cultural Authority in the Digital Age

16. Sport Media Texts and Audiences: A Critical Overview of Issues, Interactions and Interventions

17. Through the Lens of Hillsborough: The Truth, Archival Remixes and Critical Sociology

Thomas F. Carter is Principal Lecturer in the Anthropology of Sport at the University of Brighton, UK. His research increasingly focuses on questions of citizenship, personhood and humanity as it emerges out of his earlier work on the political economy of sport and the interlocutions of space, movement, and bodies around the world but most especially in Cuba. He is the author four books, the most recent of which explores how running makes us human

Daniel Burdsey is a Reader and Deputy Head of School (Research and Enterprise) in the School of Sport and Service Management at the University of Brighton, UK. His current research focuses on ageing and physical culture in British Asian communities; social and cultural aspects of the contemporary English seaside and coast, especially the connections between race, whiteness, migration and ‘new’ spaces of multiculture; and sport, decoloniality and anti-racist resistance

is Senior Research Fellow in the School of Sport and Service Management at the University of Brighton, UK. His current research focuses on the role of sport in supporting refugees and asylum seekers, both in camps and in host communities. Dr Doidge’s research also focuses on European football and political activism amongst football fans across Europe. He is Director of the Anti-Discrimination Division of Football Supporters Europe, and a member of refugee groups in Brighton, including the Hummingbird Project, Sanctuary on Sea, and Migrant and Refugee Solidarity