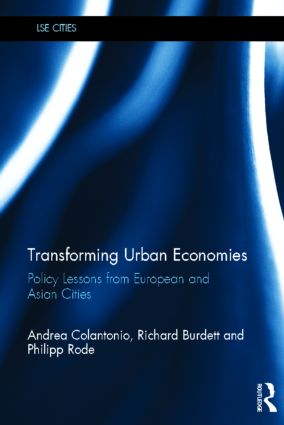 Cities house the majority of the world’s population and are the dynamic centres of 21st century life, at the heart of economic, social and environmental change. They are still beset by difficult problems but often demonstrate resilience in the face of regional and national economic decline. Faced by the combined threats of globalisation and world recession, cities and their metropolitan regions have had to fight hard to maintain their global competitiveness and protect the quality of life of urban residents

the first in an ongoing series of research volumes by LSE Cities, provides insights in how cities can respond positively to these challenges. The fine-grained and authoritative analysis of how Barcelona, Turin, Munich and Seoul have been transformed in the last 20 years examines comparative patterns of decline, adaptation and recovery of cities that have successfully managed to transform their economies in the face of economic hardship.

This in-depth and practical analysis is aimed at urban leaders, designers, planners, policymakers and scholars who want to understand the dynamics of economic resilience while cities are still suffering from the aftershocks of the 2008 recession. The book highlights the importance of aligned and multi-level governance, the need for strategic public investments and the role of the private sector, universities and foundations in leading and guiding complex processes of urban recovery in an increasingly uncertain age.

Andrea Colantonio is Senior Researcher at LSE Cities, London School of Economics and Political Science (LSE). He is an urban geographer and an economist specialising in the investigation of complex linkages between urban growth, sustainability and geographies of development in developing and developed countries.

Ricky Burdett is Professor of Urban Studies at the London School of Economics and Political Science (LSE) and director of LSE Cities and the Urban Age programme. He is Global Distinguished Professor at New York University and a council member of the Royal College of Art.

Philipp Rode is Executive Director of LSE Cities and Senior Research Fellow at the London School of Economics and Political Science. He is Ove Arup Fellow with the LSE Cities Programme and Councillor with Green Growth Leaders (GGL), a global alliance of cities, regions, countries and corporations.

LSE Cities is an international centre at the London School of Economics and Political Science that carries out research, education and outreach. Its mission is to study how people and cities interact in a rapidly urbanizing world, focusing on how the design of cities impacts on society, culture and the environment. This is the first in a series of publications by Routledge that cover innovative research in the areas of the urban economy, health and well-being, as well as climate change and the environment. LSE Cities’ interdisciplinary approach is designed to widen our understanding of the complexities of the modern urban condition at a global level, providing practical solutions to urban policymakers and scholars who are engaged with understanding the challenges and opportunities of living in an increasingly urban age.