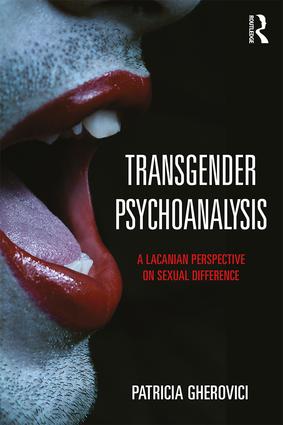 Drawing on the author’s clinical work with gender-variant patients, Transgender Psychoanalysis: A Lacanian Perspective on Sexual Difference argues for a depathologizing of the transgender experience, while offering an original analysis of sexual difference. We are living in a "trans" moment that has become the next civil rights frontier. By unfixing our notions of gender, sex, and sexual identity, challenging normativity and essentialisms, trans modalities of embodiment can help reorient psychoanalytic practice.

This book addresses sexual identity and sexuality by articulating new ideas on the complex relationship of the body to the psyche, the precariousness of gender, the instability of the male/female opposition, identity construction, uncertainties about sexual choice—in short, the conundrum of sexual difference. Transgender Psychoanalysis features explications of Lacanian psychoanalysis along with considerations on sex and gender in the form of clinical vignettes from Patricia Gherovici's practice as a psychoanalyst. The book engages with popular culture and psychoanalytic literature (including Jacques Lacan’s treatments of two transgender patients), and implements close readings uncovering a new ethics of sexual difference.

These explorations have important implications not just for clinicians in psychoanalysis and mental health practitioners but also for transgender theorists and activists, transgender people, and professionals in the trans field. Transgender Psychoanalysis promises to enrich ongoing discourses on gender, sexuality, and identity.

"In this strikingly original work, Patricia Gherovici makes a powerful argument for the compatibility of transgenderism and psychoanalysis. Not only that: far from suggesting how psychoanalysts might "treat" transgender people, Gherovici persuasively proposes that transgenderism might provide new ideas for the clinic. Starting from the premise that the body is not a given, fixed entity, but entails a process of embodiment (a becoming of the body), she argues that psychoanalysis-Lacanian psychoanalysis in particular-is uniquely qualified to support transgenderism’s commitment to new forms of desire.[The frequently presumed "gender trouble" of transgender people is in fact a universal condition: the impossibility of representing sexuality, an impossibility that implicitly subverts the fixity of all identitarian claims.]With its impeccable scholarship, lucid presentations of complex ideas, and impressive theoretical sophistication, Gherovici’s important work will surely attract a wide audience of readers interested in cultural studies focused on gender and sexuality."-Leo Bersani, emeritus professor, UC Berkeley, author of Homos and Is the Rectum a Grave and Other Essays.

"Patricia Gherovici is the psychoanalyst we need now, more so than ever, to show us how and why "sex" remains a problem, an enigma without adequate solution, even for psychoanalysis. Gherovici navigates the difficult terrain of our transgender cultural moment better than any clinician I’ve read. Her study will be tremendously illuminating for clinical practitioners, as well as for theorists of gender and sexuality."-Tim Dean, author of Unlimited Intimacy and Beyond Sexuality

"Psychoanalysis, historically, has not had a good grasp on transgender issues. This is a shame, given that psychoanalytic theory generally offers one of the most robust accounts of subjectivity availabile to us, and that psychoanalytically-infomed clinical practice has great capacity to achieve good therapeutic results for people experiencing psychical suffering. Thankfully that's changing, in no small part through the brilliant revisionist work of Patricia Gherovici, who demonstrates that Lacan was never as hostile to transsexual clients as some of his followers have made him out to be. In her deft handling, the existence of nonpathological transgender subjects brings a transformative pressure to bear on key psychoanalytic concepts, while demonstrating how psychoanalytic insight can help relieve suffering for transgender people without invalidating their way of being in the world."-Susan Stryker, Ph.D., Associate Professor of Gender and Women's Studies, University of Arizona, and co-editor of TSQ: Transgender Studies Quarterly

Chapter 3: Gender in the Blender

Chapter 8: From Trance to Trans in Lacan’s Revisions of Hysteria

Chapter 10: The Sweet Science of Transition

Chapter 11: The Singular Universality of Trans

Chapter 12: Portraits in A Two-Way Mirror

Chapter 13: Plastic Sex, the Beauty of It

Chapter 14: That Obscure Object: From Beauty to Excrement

Chapter 16: The Art of Artifice

Chapter 17: Clinic of the Clinamen

Patricia Gherovici, Ph.D. is a psychoanalyst and award-winning author. Her books include The Puerto Rican Syndrome (Other Press, 2003, Gradiva Award and Boyer Prize), Please Select Your Gender: From the Invention of Hysteria to the Democratizing of Transgenderism (Routledge, 2010), Lacan On Madness: Madness, Yes You Can’t (with Manya Steinkoler, Routledge, 2015), and Lacan, Psychoanalysis, and Comedy (with Manya Steinkoler, Cambridge University Press, 2016).