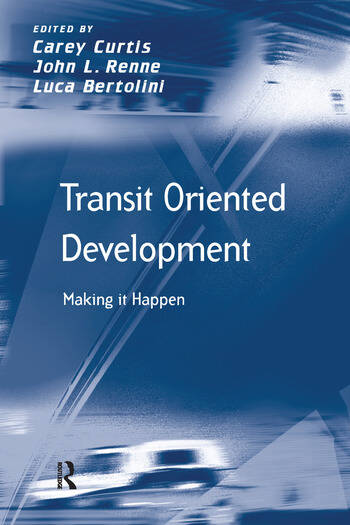 Transit Oriented Development: Making it Happen brings together the different stakeholders and disciplines that are involved in the conception and implementation of TOD to provide a comprehensive overview of the realization of this concept in Australia, North America, Asia and Europe. The book identifies the challenges facing TOD and through a series of key international case studies demonstrates ways to overcome and avoid them. The insights gleaned from these encompass policy and regulation, urban design solutions, issues for local governance, the need to work with community and the commercial realities of TOD.

'This is an important book, and it could not be more timely. Transit Oriented Development: Making It Happen will be an invaluable tool as America seeks to renew its urban infrastructure and revitalize its cities, after nearly a century of auto-centric development that has created today’s economically unsustainable and environmentally poisonous suburban land-use paradigm. President Barack Obama should make this book required reading throughout his Administration.' Jim RePass, President and CEO, The National Corridors Initiative, Inc., USA 'This is a highly significant book for researchers, policy-makers and practitioners interested in mobilising policies and investment to shape travel behaviour in cities. It brings together important conceptual development of TOD practices with a wealth of case studies from a wide variety of developed world countries.' Geoff Vigar, University of Newcastle, UK 'A new national administration, with the support of the Congress, has finally decided that it is time to...create the conditions that will encourage transit-oriented development. That is what this book is about - and it should be required reading for all of us at every level of government that understand the importance of a fresh new approach to development in America.' Michael Dukakis, former US Presidential Candidate 'Transit Oriented Development is a rich international compendium with twenty six contributors telling scholarly stories of transit oriented development (TOD) implementation... The wide diversity of case study TOD implementation examples provided in the book should enable readers with a variety of perspectives to find lessons that apply to them.' Environment and Planning B: Planning and Design