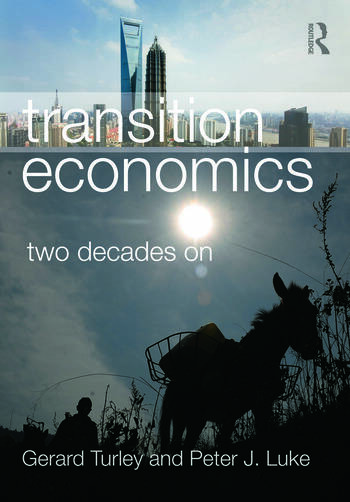 Treating its subject matter thematically, the book incorporates much of the transition economics literature and evidence that have evolved over the past two decades. In particular, the authors focus on the most important aspects of economic transition, including:

The textbook covers a wide range of both contemporary microeconomic and macroeconomic issues, in over thirty ex-socialist European and Asian countries, including Russia and China.

is more than just a book about a particular part of the world or the transformation that was experienced at a particular time in history. The authors believe that the study of the economics of transition gives the reader an insight into theories, policies, reforms, legacies, institutions, processes and lessons that have application and relevance, beyond the specific transition from plan to market, to other parts of the world and to other times in history.

Gerard Turley is at the J.E. Cairnes School of Business and Economics in the National University of Ireland, Galway.

Peter J. Luke was a senior lecturer in economics at London South Bank University before joining the UK Civil Service. He is currently teaching economics in Beijing, China.

'The transition from central planning to a market type economy is one of the most important and challenging "events" that have affected the world economy in recent decades. This book does an outstanding job of bringing transition to life by showing how the process has affected the economy in general, employment, living standards, and much else besides. The book is essential reading for anyone seriously wanting to understand a large and growing part of the modern world.'

‘Transition Economics: Two Decades On is timely, well-written and comprehensive. The authors show an impressive grasp of a whole range of issues concerning the transition from socialism to market economics. A key strength of the book is the focus on countries such as China and Vietnam, which are often overlooked in analyses of transition. The book deserves a wide readership.’