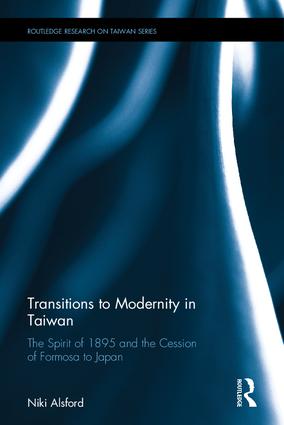 Transitions to Modernity in Taiwan

The Spirit of 1895 and the Cession of Formosa to Japan, 1st Edition

On 19 April 1895, British Consul Lionel Charles Hopkins, at the northern port of Tamsui, was summoned by Tang Jingsong, the governor of Taiwan, to his yamen in the western district of Taipei. Shortly after his arrival, Hopkins was handed a petition. Signed by a number of Taiwanese ‘notables’, the document appealed to the British government to incorporate the island into a protectorate in the wake of an impending Japanese invasion. The British declined.

This book addresses the interconnectivity of these two communities, by focusing on the market town of Dadaocheng in northern Taiwan. It seeks to contextualise and examine the establishment of a ‘settler society’ as well as the creation of a sojourning British community, showing how they became a precursor of modernity and ‘middle classism’ there. By uncovering who the signatories of the petition were and what their motivation was to call upon the British consulate to bring the island under its protection, it brings into focus a remarkable period of transition not only for the history of Taiwan but also for the modern history of China. Using 1895 as a year of enquiry, it ultimately challenges the current orthodoxy that modernity in Taiwan was simply a by-product of the Japanese colonial period.

As a social and transnational history of the events that took place in Taiwan during 1895, this book will be useful for students of East Asian Studies, Modern Chinese Studies and Asian History.

1. The Petition: The History Behind a Document

2. 'The Poor in China Just Grab a Bag and Run Over': Han Pioneer Settlement in Formosa from the Seventeenth Century

4. 'And There the Twain Shall Meet': The Formation of an Urban Gentry in a Market Town in Northern Taiwan

5. The Spirit of 1895: Occupation, Capitulation, and Resistance

Niki J.P. Alsford is Reader in Asia Pacific Studies at the University of Central Lancashire and is Research Associate at the Centre of Taiwan Studies at SOAS.