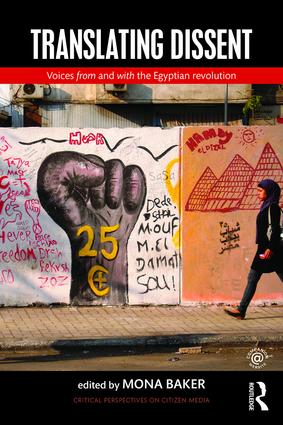 Voices From and With the Egyptian Revolution, 1st Edition

*Written by the winners of the Inttranews Linguists of the Year award for 2016!*

Discursive and non-discursive interventions in the political arena are heavily mediated by various acts of translation that enable protest movements to connect across the globe. Focusing on the Egyptian experience since 2011, this volume brings together a unique group of activists who are able to reflect on the complexities, challenges and limitations of one or more forms of translation and its impact on their ability to interact with a variety of domestic and global audiences.

Drawing on a wide range of genres and modalities, from documentary film and subtitling to oral narratives, webcomics and street art, the 18 essays reveal the dynamics and complexities of translation in protest movements across the world. Each unique contribution demonstrates some aspect of the interdependence of these movements and their inevitable reliance on translation to create networks of solidarity. The volume is framed by a substantial introduction by Mona Baker and includes an interview with Egyptian activist and film-maker, Philip Rizk.

With contributions by scholars and artists, professionals and activists directly involved in the Egyptian revolution and other movements, Translating Dissent will be of interest to students of translation, intercultural studies and sociology, as well as the reader interested in the study of social and political movements. Online materials, including links to relevant websites and videos, are available at http://www.routledge.com/cw/baker. Additional resources for Translation and Interpreting Studies are available on the Routledge Translation Studies Portal: http://cw.routledge.com/textbooks/translationstudies.

‘This is a volume of uncommon urgency, intellectual range, and political importance. Translation, which occupies the crossing point of discourse and power and which affects all networks of word, image and sound, must now stand near the centre of any study of global activism. The richly diverse set of contributors, the activists and scholars, the creators and analysts, located in and out of Egypt, uncover both the conceptual depth and the social force in the contemporary tasks of the dissenting translator.’ Michael H. Levenson, University of Virginia, USA

‘If you think you know what translation means, think again. This fascinating book uncovers translation as a political act that is negotiated within the spaces that lie between cultures and languages, between the local and the global, between the translatable and the untranslatable. With rich contributions from activist translators, journalists, writers, film makers, scholars, graphic and graffiti artists, all involved in ‘translating’ the Egyptian revolution, Mona Baker has produced a provocative and enlightening volume that will change the way you think about protest, language, culture, politics and translation. It also provides insight into the chaos and complexity of the Egyptian revolution from the perspective of many of the actors involved, highlighting the role art, culture and language play in shaping our perceptions of contemporary political reality, and our understandings of violence, emotions, power, resistance, solidarity, and revolution.’ Dr. Cristina Flesher Fominaya, University of Aberdeen, Scotland, and author of Social Movements and Globalization: How Protests, Occupations and Uprisings are Changing the World (2014)

‘Four years into the 2011 Egyptian Revolution, Translating Dissent showcases translation in its broad sense as a new, radical space of intercultural negotiation where discursive and performative representations of revolt in the local and global context take place. By focusing on the recent developments in Egypt and its ongoing contests over freedom of speech and the role of political activism and dissent, the contributors to the volume have brilliantly demonstrated the possibilities offered by translation to create networks of solidarity. The field of translation and cultural studies is that much richer for their efforts.’ Faten I. Morsy, Ain Shams University, Egypt

‘Reading these essays one is struck by the enormous force of creative energy that prevailed during the height of protest in Egypt. The writing underscores the ethical and political role that language, and especially translation, played in broadcasting the multi-media responses to events taking place on the ground. The writers reveal a newly imagined collective consciousness of an alternative global future. These essays ensure that this vision will remain an active force for human rights and international solidarity.’ Moira Inghilleri, University of Massachusetts Amherst, USA

‘Rarely has scholarly work on translation been transformed into such an affective experience. The choice to let people write from the streets and from their hearts has resulted in a book that is about much more than translation. This is a book about solidarity, and it is itself an act of solidarity. It tells stories that cannot be found elsewhere, that convey not the meaning of the revolution, but the feeling. Rather than offering us a coherent work on 'translation', the book brings the reader into the uncertain world of the Egyptian revolution, in which every form of translation becomes a political act that inspires, moves, depresses and challenges the reader.’ Marianne Maeckelbergh, Leiden University, the Netherlands, and author of The Will of the Many: How the Alterglobalisation Movement is Changing the Face of Democracy (2009)

‘In no other book did the term translation acquire its full significance in revolutionary networking that characterizes modern times. With the Egyptian Revolution in its focus, this is a valuable companion to all those who were or will be part of any protest movement around the globe. Brilliant.’ Mourid Barghouti, Palestinian poet and author of I Saw Ramallah

‘Translating Dissent offers a compelling case study of language, art, and the mediating powers of translation during the Egyptian Revolution. The range of authors—from Cairo’s own artists, writers and film-makers to non-Egyptian activists and scholars—details translational strategies in a place-based context of revolution and dissent while expanding our understanding of translation itself. Building from Baker’s illuminating introduction to the micro-studies that follow, the volume reveals translation’s ongoing, if insufficiently recognized role in forging local solidarities as well as global networks.’ Sandra Bermann, Cotsen, Princeton University, USA

‘The rich studies and personal reflections that Mona Baker has collected here put translation at the dynamic centre of political praxis, while opening up the concept of translation itself, rethinking its meaning and scope by training a wide-angle lens on oppositional activism in and for Egypt since 2011. Examining a varied array of media and translational contexts, the contributors give eloquent voice to the intersections of physicality and narrative, language(s) and (other) visual forms, commitment and sheer determination that Egypt’s many oppositional acts of translation have demonstrated.’ Marilyn Booth, Khalid bin Abdallah Al Saud, Oriental Institute and Magdalen College, University of Oxford, UK

‘As new and established forms of activism swiftly move between local and global realities, translation, in its many forms, becomes integral to the life of social and political movements. Translating Dissent makes visible precisely this kind of deep and deeply influential translation, allowing us to hear its multiple voices.’ Loredana Polezzi, Cardiff University, UK

Beyond the Spectacle: Translation and Solidarity in Contemporary Protest Movements

A Wish Not to Betray: Some Thoughts on Writing – and Translating – Revolution

Translation and Diaspara Politics: Narrating the Struggle at ‘Home’ and ‘Abroad’

Text and Context: Translating in a State of Emergency

What Word Is This Place? Translating Urban Social Justice and Governance

Translation and the New Poetics of Egypt’s Revolution

Translation and Solidarity in Words of Women from the Egyptian Revolution

On Translating a Superhero: Language and Webcomics

An Archive of Hope: Translating Memories of Revolution

Translation and the Visual Economy of Protest

Translating Emotions: Graffiti as a Tool for Change

Solidarity, Translation and the Politics of the Margin