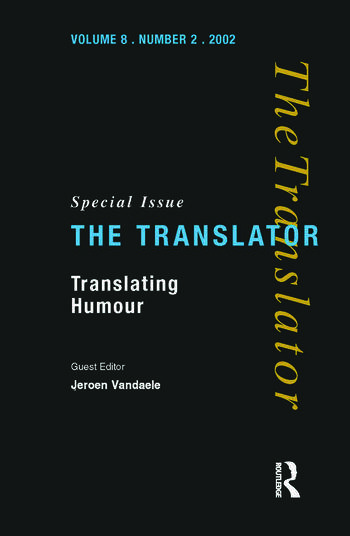 It is all too often assumed that humour is the very effect of a text. But humour is not a perlocutionary effect in its own right, nor is laughter. The humour of a text may be as general a characteristic as a serious text's seriousness. Like serious texts, humorous texts have many different purposes and effects. They can be subdivided into specific subgenres, with their own perlocutionary effects, their own types of laughter (or even other reactions).

Translation scholars need to be able to distinguish between various kinds of humour (or humorous effect) when comparing source and target texts, especially since the notion of "effect" pops up so frequently in the evaluation of humorous texts and their translations. In this special issue of The Translator, an attempt is made to delineate types of humorous effect, through careful linguistic and cultural analyses of specific examples and/or the introduction of new analytical tools. For a translator, who is both a receiver of the source text and sender of the target text, such analyses and tools may prove useful in grasping and pinning down the perlocutionary effect of a source text and devising strategies for producing comparable effects in the target text. For a translation scholar, who is a receiver of both source and target texts, the contributions in this issue will hopefully provide an analytical framework for the comparison of source and target perlocutionary effects.

Translation and Humour: An Approach Based on the General Theory of Verbal Humour, Salvatore Attardo, pp 173-194
An application of the General Theory of Verbal Humour (GTVH) to the theory of humour translation is presented. The GTVH is presented as a theory that allows us to relate perceived differences between jokes to six hierarchically ordered Knowledge Resources (parameters), namely knowledge concerning Language; Narrative Strategies; Target(s); Situation; Logical Mechanism(s); Script Opposition(s). The GTVH's contribution to theory on humour translation is the metric of joke similarity, which allows the translator to evaluate how much a translated joke differs from the source joke. Some strategies for applying the metric heuristics to translation are provided. Finally, the issue of the translation of puns is taken up and it is argued that humorous translation cannot be absolutely guaranteed in all cases.

This paper explores 'Marlovian wisecracks' in Raymond Chandler's early texts and their translations into Greek. Source texts and target texts are analyzed using the GTVH (Attardo 1994, 2001), which provides a sound linguistic framework allowing for a comparison of humorous texts. In addition, cognitive linguistic insights are adopted (particularly from Fillmore and Kay's forthcoming work on Construction Grammar) as it is suggested here that for the purposes of translation research we can benefit from a cognitively based, fine-grained analysis emphasizing idiomaticity. Shifts attested in the target texts are explained in terms of (a) encoding or decoding idiomaticity and conventionalized meanings of constructions, and (b) different humour traditions or repertoires (Toury 1997) in the two languages. A tentative hypothesis is presented relating the suggested motivation for observed shifts to processing effort, which has been shown to impact on humour appreciation (Attardo et al. 1994).

On Translating Queneau's Exercices de style into Italian, Umberto Eco, (Translated by Mary Louise Wardle), pp 221-240
Eco shows how a careful rhetorical analysis of Exercices de style underlies his Italian translation of Queneau's text. At first sight, it may look as though Queneau had wanted to put into practice a variety of traditional figures from the Ars rhetorica, each text focusing on one rhetorical device. Closer scrutiny reveals instead that (1) he did not limit himself exclusively to such traditional figures (e.g. parodies also appear), (2) he used many more figures than the exercises' titles suggest, and (3) he did not typically use the figures for 'serious' rhetorical purposes (e.g. for aesthetic, stylistic or persuasive effect). (1) and (2) demonstrate the ubiquitous nature of rhetoric and call for a broader framework for studying it: Groupe µ describes devices along two distinctions ('word/higher order' and 'form/content'). Regarding (3), Eco remarks that the comic may be a standard rhetorical purpose but that, very often, Queneau applied the rules of rhetoric literally, contravening their spirit, and thus created opportunities for play. Translating the Exercices, Eco suggests, is detecting, applying, evoking and flouting the rules in a similar way; with one important caveat: the flouting of form-related rules does not perforce create completely nonsensical linguistic chaos, since the generic embedding and its underlying rules of transgression confer meaning on 'noise'

Whereas the exact nature of the relation between humour and verbal irony has not been fully established yet, humour has often been seen as one of the important 'functions' of irony. In this study we set out to examine empirically how humorous irony fares in the constrained form of translation that subtitling is, and whether these observations can be related to known humour translation and subtitling strategies. Drawing on a speech act approach to irony we studied 211 humorous ironic utterances and their Dutch subtitles from twelve episodes of the Blackadder series (Blackadder II and Blackadder the Third). While a quantitative approach shows that nearly all these subtitles retain some degree of ironic potential, we also find that in about two thirds of these cases verbal ironic cues are influenced by the translation in interesting ways. A qualitative analysis shows that on the whole the Dutch subtitles are often more explicitly critical. This means that from the known strategies of irony translation only a few turned out to be very important in these data. Part of this could be explained by subtitling strategies reported in the literature, which generally seem to work against the preservation of a particular kind of ironic cues, i.e. those that we found to have an interpersonal rather than referential function.

'Funny Fictions': Francoist Translation Censorship of Two Billy Wilder Films, Jeroen Vandaele, pp 267-302
The article examines Francoist translation censorship of Billy Wilder's film comedies The Apartment and Some Like It Hot. It is argued that the concept of superiority deserves more attention in humour studies: when it comes to explaining the Francoist reception and translation of comedy, superiority is a more powerful concept than the more generally applied notion of pure incongruity. The different reception of Wilder's films by Francoist and Hollywood censorship confirms that humour is a matter of interpretation, clearly not of text-immanent features alone. More specifically, the interpretation of humour as innocently incongruous or tendentiously subversive depends on cultural and historical factors. A semiotics of incongruity and superiority is applied in order to explain Francoist reception and translation. Francoist censorship boards regulate the importation of comedy according to their own standards of humour. In translation, apparently small but constant textual changes in humour reshape characters and plot, and work to streamline identification processes. Some sectors of film studies in Spain may not be aware of the impact that Francoist dubbing had and still has on the perception and reception of foreign films.

A Great Feast of Languages: Shakespeare's Multilingual Comedy in King Henry V and the Translator, Dirk Delabastita, pp 303-340
Shakespeare's King Henry V is a play which exploits multilingualism for both comic and non-comic purposes. These various functions are described before the paper moves on to explore the unique challenges that this polyglot play poses to the translator. Special attention is given to the rendering of the French-English bilingual comic scenes into French. Given that much of Shakespeare's joking in Henry V involves national stereotyping and serves a nationalistic agenda, the translators have understandably been swayed in their choices by political sensitivities, but a range of other factors play a role as well (knowledge of foreign languages, historical connotations attached to languages, conventions for language representation, translation norms, textual norms, etc.). The complexity of the field of forces and pressures surrounding the translator is such as to cast doubt on the notion of a 'general' theory of humour and (its) translation. We need further empirical study of texts and contexts, involving a cautious interpretation of possible reasons and possible effects.

Performance and Translation in the Arabic Metalinguistic Joke, Ibrahim Muhawi, pp 341-366
This research explores dynamic equivalence in interlignuistic (Arabic to English) amd intersemiotic translation (oral performance into text) with reference to the Arabic metalinguistic joke - a self-referring genre of humorous folklore that takes for its subject the rhetoric of its performance (defined as an "assumption of responsibility to an audience for a display of communicative competence" (Bauman 1977:11). This rhetoric is explored in terms of the emergent quality of performance, which is seen as the major factor in creating the desired dynamic, or rhetorical, equivalence in translation. Various aspects of the rhetoric of performance are explored, touching on linguistic and cultural issues. Translation is seen as an enabling factor in the comparative study of culture, and vice versa. The representative jokes discussed articulate certain themes with apparently 'universal' currency, such as the anxiety associated with language use in the Arabic diglossic and multilingual context, fear of feminization, loss of authenticity, Arabicizaion, and others. The thrust of the analysis is to support the stress on culture as a basic analytical category in translation studies

Playing the Double Agent: An Indian Story in English, Christi Ann Merrill, pp 367-384
How may one write an Indian story in English without replicating the violences of colonial narrative practices? Historiographers, novelists and translators often find themselves caught in the same double bind, responding to (and responsible for) two distinct audiences whose response to (and responsibility for) the other has been decidedly unequal. A similar disparity plays out between indigenous language communities within India as well, as the folktale-inspired fiction of Rajasthani writer Vijay Dan Detha shows. Detha's narrative strategies play with these fixed divisions that trouble so many postcolonial critics, using humour to establish a more flexible, self-conscious narrative community necessarily in transition. This article suggests a more complex approach to postcolonial concerns regarding the question of agency in the project of translation, by showing how one may follow Detha's lead in adapting storytelling techniques to a version of his work in English translation.

Humour in Simultaneous Conference Interpreting, Maria Pavlicek, and Franz Pöchhacker, pp 385-400
On the assumption that humour may form part of what simultaneous interpreters are called upon to translate in international conference settings, the paper makes a conceptual as well as empirical contribution to the subject. Given the dearth of literature on humour in interpreting, the authors first review various forms and functions of humour in conference settings, with illustrations from authentic corpora. Against this background, a pilot survey among conference interpreters carried out by the first author is reported. Responses from a sample of fifty interpreters working from German and/or English confirm that simultaneous interpreters sometimes face the challenge of rendering humour. The findings suggest that humour in conferences mostly takes the form of anecdotes, irony and jokes, mainly for purposes like introducing a subject or speaker, easing tension, or breaking up a difficult subject, and that English speakers are more inclined towards humorous language use than speakers of German.