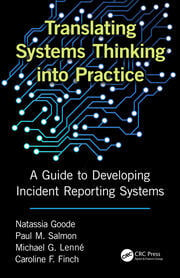 Systems thinking tells us that human error, violations and technology failures result from poorly designed and managed work systems. To help us understand and prevent injuries and incidents, incident reporting systems must be capable of collecting data on contributory factors from across the overall work system, in addition to factors relating to the immediate context of the event (e.g. front-line workers, environment, and equipment).

Natassia Goode is a Research Fellow within the Centre for Human and Sociotechnical Systems at the University of the Sunshine Coast. Dr. Goode currently holds an Advance Queensland Research Fellowship focused on applying systems thinking methods in healthcare. Her PhD and honours research in psychology investigated how people learn about complex systems. Since then, her research has focused on applying systems thinking to optimize the way that organizations manage safety. She has co-authored over 45 peer-reviewed journal articles, and numerous conference contributions and industry reports.

Paul M. Salmon is a Professor in Human Factors and the creator and director of the Centre for Human Factors and Sociotechnical Systems (www.hf-sts.com) at the University of the Sunshine Coast. Professor Salmon currently holds an Australian Research Council Future Fellowship in transport safety. He has a 17-year track record of applied Human Factors research in areas such as road and rail safety, aviation, defence, sport and outdoor recreation, healthcare, workplace safety, land use and urban planning, and cybersecurity. His research has focused on understanding and optimizing human, team, organizational, and system performance through the application of Human Factors theory and methods. He has co-authored 14 books, over 180 peer-reviewed journal articles, and numerous book chapters and conference contributions. He has received many awards and accolades for his research and, in 2016, was awarded the Human Factors and Ergonomics Society Australia’s Cumming Memorial Medal for his contribution to Human Factors research and practice.

Michael G. Lenné is an Adjunct Professor (research) at the Monash University Accident Research Centre (MUARC), Victoria, Australia. He obtained a PhD in human factors psychology in 1998 and has since served in a number of research roles in university and government settings. His most recent academic position was Professor in Human Factors at MUARC, where his research program used simulation and instrumented vehicles to study the impacts of vehicle design, technology, and road design on behavior and safety. Professor Lenné’s research is widely disseminated, with over 120 journal publications, 5 books, and over 200 reports that provide practical recommendations. He has been the guest editor for three journal special issues since 2014, and served on the editorial boards of the field’s leading journals. In 2014, he transitioned into a scientific role with a primary focus on the development of research partnerships that directly support the development of technology to improve transport safety. He maintains academic collaborations through his adjunct role at MUARC, including the flagship Enhanced Crash Investigation Study.

Caroline F. Finch is the Deputy Vice-Chancellor (Research) at the Edith Cowan University in Perth, Australia. Prior to this current role, she held a Robert HT Smith Personal Chair in Sports Safety at Federation University Australia, in Ballarat where she was also supported by a National Health and Medical Research Council Principal Research Fellowship. Since 2010, she has been the Director of the Australian Centre for Research into Injury in Sport and its Prevention (ACRISP), an IOC recognized centre focusing on research in injury prevention and the promotion of health in athletes. Professor Finch is a highly accomplished academic and world-renown researcher. She is the author of over 700 research-related publications, and has earned more than $22 million in research funding over the course of her career. She is known globally for her injury prevention, injury surveillance, and sports medicine research. She has previously been ranked as one of the 10 most highly published injury researchers of all time and is recognized as one of the most influential sports medicine researchers internationally. In 2015, she was awarded the American Public Health Association Distinguished International Career Award from the Injury Control and Emergency Health Services Section. In 2018, Professor Finch was appointed as an Officer of the Order of Australia (AO) for her distinguished service to sports medicine, particularly in the area of injury prevention as an educator, researcher, and author, and to the promotion of improved health in athletes and those who exercise.

"Dr. Natassia Goode and colleagues have created an important resource, narrowing the research-practice gap. All readers, whether ergonomics and human factors specialists or OHS or safety science practitioners, will find much to stimulate their thinking. It demonstrates that it is possible to take an evidence-based approach to incident reporting and investigation to assist learning from incidents. Whether you are developing a new incident reporting system or modifying your current workplace system, this book contains the theory and practical advice to assist with meaningful and sustainable system redesign."
—Alison Gembarovski, Ergonomics and OHS Practitioner

"With Translating Systems Thinking into Practice, authors Goode, Salmon, Lenné and Finch have taken on a daunting task: to convey the nuances of a quite a complex and layered subject matter in a way that makes it relatable and usable for industry practitioners and scholars alike — and all in a single, 288-page volume. Thankfully, they deliver on the promise, and with more than a little style.
There’s more than a bit of providence in the creation of this volume. The authors have a long history with much of what they share, and the book is a recapitulation of a research program edited in a way that makes it relatable to a much broader audience. I daresay that those who already know the authors’ work may be familiar much of the information in the book, but it’s still nice to have it all packaged up in the one volume. Systems Thinking has been around for a while but has less hold in industry than it does in academia, more so with certain disciplines who still eye it with suspicion. Part of the reason may be that it’s been tarnished by negative strokes of the human factors-brush, but it can also be somewhat impenetrable and theoretically dense — a different language for some — which is what made this book stand out so much to me."
—Australian & New Zealand Journal of Health, Safety and Environment 2018 Issue, copyright in the review is held by CCH Australia Limited